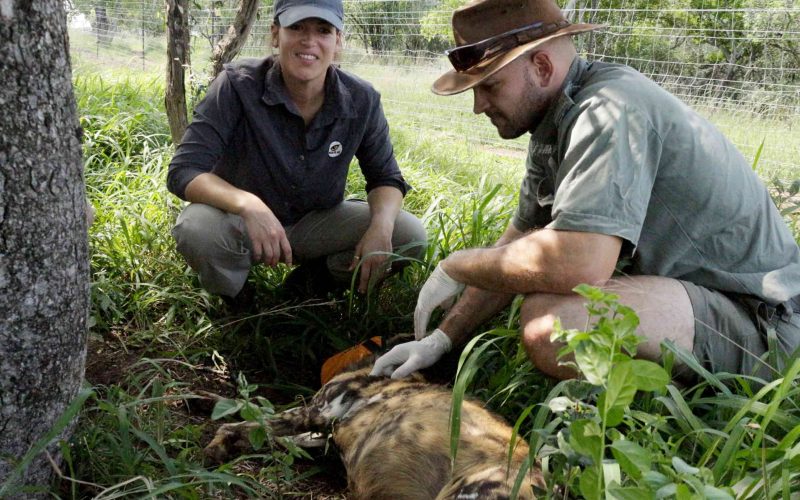 A NEW pack of African wild dogs has been introduced to a community owned game reserve in Pongola as part of efforts in KwaZulu-Natal to preserve the endangered species.

Two males were relocated to the Somkhanda Game Reserve from Hluhluwe iMfolozi Park and four females were brought from the Khamab Kalahari Reserve.

After being captured in bomas they were transported to Somkhanda in specially-designed crates, arriving on 10 October.

The operation was part of metapopulation management efforts to  improve genetic diversity and establish a more correctly composed pack in the reserve.

“The key to the survival of Africa’s endangered species is ensuring they are reintroduced into well managed protected areas where they can safely roam and strengthen in number,” said Pippa Orpen, who monitors priority species in Somkhanda for conservation organisation, Wildlife ACT.

Somkhanda first reintroduced dogs in 2014 as part of a drive to attract visitors in what has become an increasingly competitive tourism market.

Orpen said establishing the pack was part of a bigger vision being driven by the KZN Wild Dog Advisory Group (WAG).

Outside of the Kruger National Park, South Africa’s Wild Dog population  was managed as a single population, with reintroductions and relocations used to maintain genetic diversity, she said.

”This is also crucial in preventing overpopulation in smaller reserves,” she said. 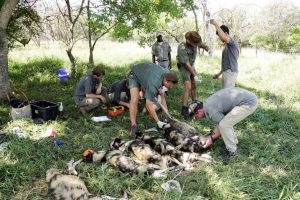 BONDING: Ezimvelo KZN Wildlife vet, Dr Rowan Leeming and the Endangered Wildlife Trust’s Cole du Plessis rubbing recolcated male wild dogs against the females. Transferring scent between individuals works brilliantly as a bonding method. There was little aggression when the dogs woke up from the sedatives, with bonding beginning almost immediately. The new pack will remain in the holding boma for a couple of weeks while they get to know each other and acclimatise to their new surroundings. After that, once reserve management is happy with the progress, they will be released into this 12000ha community owned reserve. Picture: Casper Strydom, Wildlands.

The population is managed through reintroductions and relocations to simulate the natural process of dispersal, pack formation and colonisation of new areas.

There are an estimated total of 617 dogs in the country, with 313 of these in the Kruger National Park and 150 in KZN. 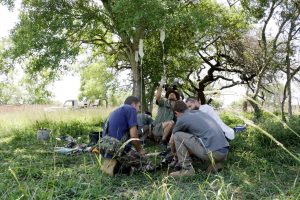 DRIP AFTER TRIP: After their long journey from the Khamab Kalahari Reserve each female was rehydrated via intravenous drip. The IV also aids in speeding up recovery from the sedatives and ensures the pack settles into their new surroundings. Picture: Casper Strydom, Wildlands. 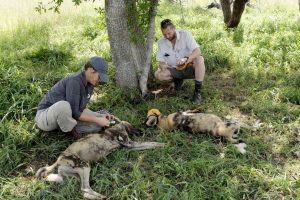 KEEPING TRACK: Somkhanda Game Reserve manager, Meiring Prinsloo and Wildlife ACT’s priority species monitor, Pippa Orpen fitting new tracking collars to the males. These collars will enable the monitoring team to track the movements of the pack as they establish themselves on the reserve. Habitat loss, poaching and disease are three significant threats to the African Wild Dog and monitoring these packs aids in ensuring their survival. Picture: Casper Strydom, Wildlands.

The species (Lycaon pictus) requires large, well-managed areas with good game numbers for food. But habitat loss, fragmentation, disease and conflict within unfavourable land has decimated wild dog populations across the continent and it was classified endangered by the International Union for Conservation for Nature in 2016.

Several organisations collaborated on the Somkhanda relocation, including the reserve itself through the Emvokweni Community Trust, the Endangered Wildlife Trust, Wildlife ACT, Ezemvelo KZN Wildlife, Wildlands, a programme of the Wildtrust and Khamab Kalahari Reserve. 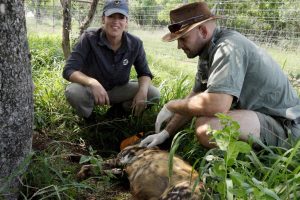 FEATURED IMAGE: Pippa Orpen (left) of Wildlife ACT and Ezemvelo KZN Wildlife veterinarian Dr Gabor Lukacs monitoring the breathing and heart rate of one of the males. Both males were sedated in the boma before the four new females, also sedated, were brought in. Picture: Casper Strydom, Wildlands

* Now read about the ‘Girl with the wild dog tattoo’