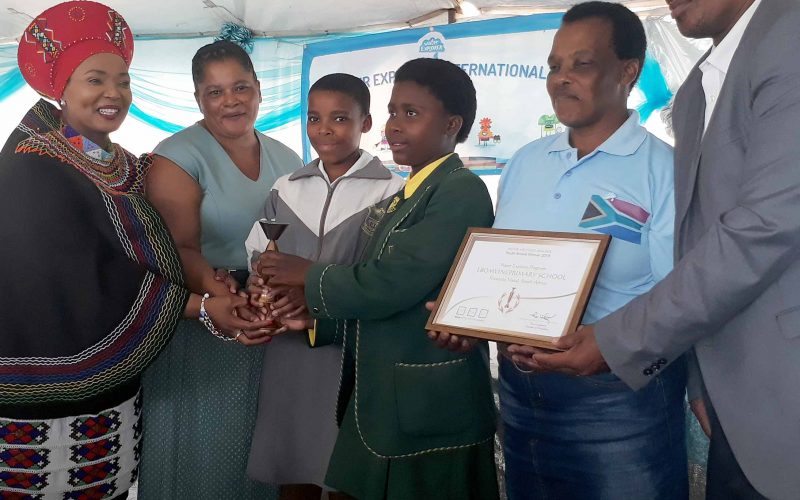 THE rural South African school that won an international award for its wise water use is again making waves and has received the royal nod for its efforts.

Winner of an innovation award at Water Explorer event in London last year,  Ebomvini Primary, of Izingolweni on the KwaZulu-Natal South Coast, has just finished first in the youth category at the World Water Food and Air Awards (WAFA).

Ebomvini Primary, of Izingolweni on the KwaZulu-Natal South Coast, finished first in the youth category at the recent World Water Food and Air Awards.

And to seal the deal, Princess Zama-Zulu Shange presented pupils and staff with a WAFA trophy and certificate on 7 February.

The award recognised the school’s inspirational commitment to sustainability practices, which have benefited its community.

Shange was taken on a tour  to see the school’s projects in action.

She was shown a pond built to attract frogs into a permaculture garden and was told how grey water fed the garden and mulching prevented evaporation.

Other water saving schemes at the school included tippy taps and the princess saw how these simple contraptions were always available for washing hands.

Drinking buckets and cups were in every class and also cut water wastage.

Shange was wowed by the efforts and called the eco-brick furniture at the school, made from recycled material, “fantastic”.

“You are all a ray of light and hope not just for your school and community but for the whole world. I am deeply impressed by the knowledge around environmental issues the learners have demonstrated as well as their innovation,” she said.

Teacher Poppy George said the school was honoured to have received the award.

“It is so important that we look after our water resources and biodiversity as this will in turn ensure our food security in the future. WAFA inspires us to continue our efforts to help develop learners into caring citizens who value their natural environment,” said George.

In October last year Ebomvini represented the country at the international Water Explorer event in London and was awarded the Innovation and Students’ Choice award.

Since then, the school has made numerous TV and radio appearances and featured in many newspapers.

But the newfound fame has not distracted it from its mission.

Water Explorer coordinator and teacher Youth Mavundla said, “We are so grateful for the recognition and experiences we have had through our efforts, but it is not about the awards. It is about sustaining what we have started and inspiring other schools and people to get on board.”

Water Explorer is an online fun, inspiring and educational programme which empowers pupils to tackle  environmental with a water theme.

It is supported by GAP UK the programme started in 2014 and is implemented in South Africa by the African Conservation Trust.  Register for free at www.waterexplorer.org 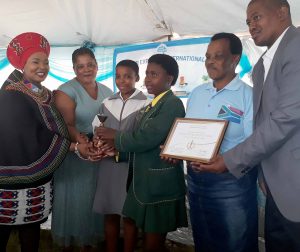