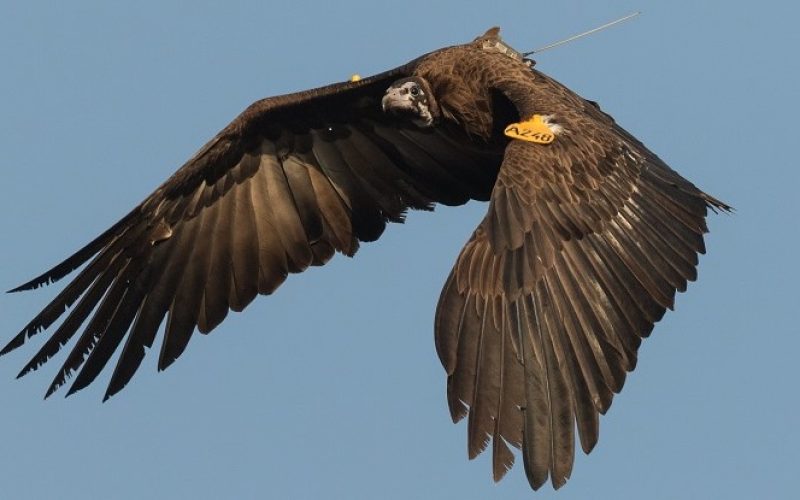 The first of at least five new “vulture safe zones” in Southern Africa are about to take off as private landowners and other partners join the battle to save Africa’s imperilled carrion clean-up birds. Tony Carnie and Fred Kockott report

Africa needs to face up to its vulture crisis.

Africa’s vulture populations have declined by an average of 62 percent over the last three decades – with seven species crashing by 80 percent – mirroring the dramatic collapse of several Asian species.

These were among findings of recent research presented by leading animal scientist Brent Coverdale at the Conservation Symposium, one of South Africa’s biggest annual gatherings of conservationists, environmental scientists and wildlife experts.

“We need to think globally and act locally,” Coverdale told attendees at the event, held annually in Howick in the KZN Midlands.

“We all know of the Asian vulture crisis, where we had vulture declines of 90-95 percent in the early 1990s. It’s something that drives us. We do not want to be sitting in the same boat, where one day people will ask, so what were we doing when the crisis was happening?” 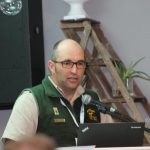 Coverdale, who works for Ezemvelo KZN Wildlife, a South African government conservation body, stressed the vital roles that vultures play in ecosystems. By swiftly stripping the flesh from dead animals, they reduce the spread of disease as well as the number of animals scavenging at rotting carcasses.

“We really can’t afford to lose them. In nine minutes they can clean up an entire carcass,” Coverdale said

There are several reasons for the decline of African vultures, but deliberate or accidental poisoning is the biggest peril.

Gareth Tate, the Birds of Prey Programme manager for the Endangered Wildlife Trust (EWT), says poison accounts for about 60 percent of vulture deaths in the Southern Africa region.

Some poisoned bait is laid by livestock owners to kill predators, like jackals. Vultures feeding off the carcasses subsequently die, often in significant numbers. Others are poisoned deliberately to harvest body parts for making muthi, traditional medicine potions.

In one of the worst mass-poisoning cases on record, at least 540 vultures were killed near Botswana’s Chobe National Park earlier this year after feeding on elephant carcasses spiked with a potent poison by wildlife poachers, in an apparent effort to conceal illegal activities from rangers.

In this case, the carcasses were not removed for two to three weeks, resulting in an extended cycle of death as more vultures and other scavengers arrived to feast. 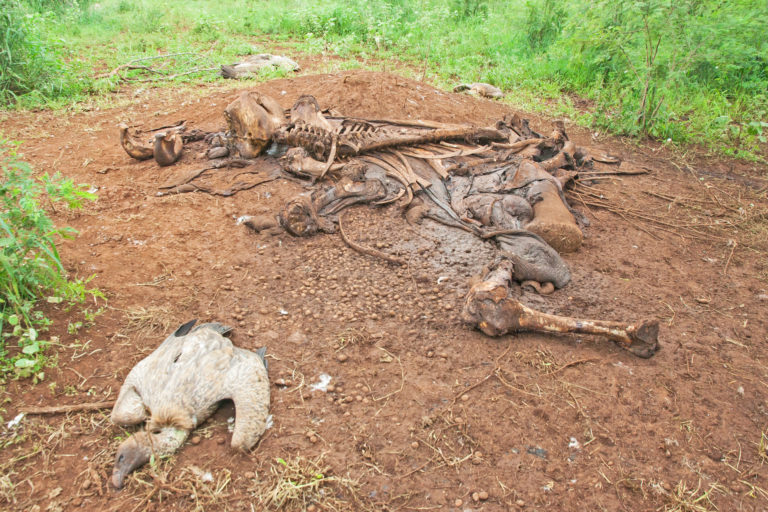 A dead vulture next to a dead elephant in southern Mozambique. The carcass had been laced with toxic farm poisons. Image courtesy Andre Botha

Andre Botha, EWT’s Vultures for Africa Programme manager, said that while it was hard to quantify the numbers of vultures killed for belief-based use, recent studies estimated that direct persecution of vultures either for muthi or food was about 29 percent of all vultures killed in Africa. Vultures are also poisoned deliberately for the traditional medicine trade. The misconception that these carrion birds have psychic powers, or can ‘see into the future’ has led to a demand for vulture’s heads and other body parts.

While Botha was not at this year’s symposium, he said the  belief-based use of vultures was a significant and growing threat to  the continent’s vultures”. This, he said, needed to be openly discussed “with the same degree of vigour as is the misconceptions associated with the use of rhino horn” in Asia.

“It is an inconvenient truth that must be addressed,” added Botha.

Accidental drownings in farm water reservoirs have also been reported, and research has flagged lead bullet fragments in animal carcasses as an increasing concern.

But BirdLife South Africa vulture project manager Linda van den Heever said many landowners and game ranch owners seemed resistant to halt the use of lead ammunition on their land, complaining that lead-free ammo is less effective and more expensive.

At the symposium, several researchers outlined the results of recent partnerships to arrest the growing decline of vultures in Southern Africa.

According to EWT, the emphasis of the vulture safe zones will be to encourage positive action, “focusing less on prohibition and negative messaging, and more on sound environmental practices that could provide landowners with reputational and economic benefits.”

In support of the program, participating landowners have agreed to stop baiting carcasses with poison, and modify concrete water reservoirs to reduce the risk of accidental drowning. 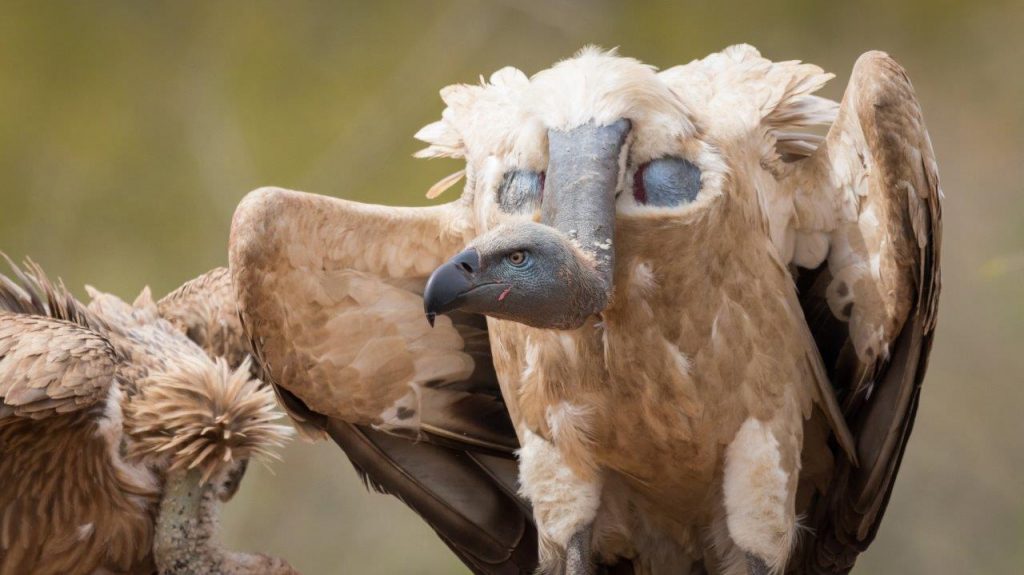 Cape vulture: by stripping the flesh from dead animals, vultures reduce the spread of disease as well as the number of animals scavenging at rotting carcasses. Image courtesy John Davies/EWT.

Further south, in the arid Karoo region, private landowners and South African National Parks are establishing two other zones, one in the vicinity of Mokala National Park, approximately 70 kilometers (43 miles) south-southwest of the diamond-mining town of Kimberley, and a larger one that incorporates the Karoo, Camdeboo and Mountain Zebra national parks — around 96,000 hectares (237,200 acres).

In Mpumalanga province, the focus will be on protecting important breeding clusters of critically endangered white-backed (Gyps africanus) and hooded vultures (Necrosyrtes monachus) along the Blyde and Olifants rivers, while there are plans for a fifth safe zone in KwaZulu-Natal province.

The safe zones will complement work already undertaken by Ezemvelo and its partners in conserving vulture populations in the Zululand and Ukhahlamba-Drakensberg regions under the umbrella of Project Vulture, a multi-stakeholder collaboration.

Coverdale highlighted that vultures nesting in apparent safety in South Africa’s government-run wildlife parks flew well beyond the boundaries of protected areas while foraging — in some cases as far as Namibia, Botswana, Zimbabwe and Mozambique.

It was thus vital that South African vulture conservation groups worked more closely with conservation agencies in neighboring countries to protect these birds.

He said it was equally important to find ways to combat the trade in vulture parts for traditional medicine.

Nomthandazo Sam Manqele, a researcher at the South African National Biodiversity Institute (SANBI) and the University of KwaZulu-Natal, presented preliminary findings from her study of vulture parts sold at two traditional medicine markets near Durban and Nongoma.

As most vultures entering the trade have been killed with poisons, this places both users and traders at risk, Manqele said.

Coverdale said an intervention strategy had been developed to reduce this consumption and demand for vultures through an awareness-building campaign targeting consumers and current stakeholders in the trade.

And the good news, said Manqele, was that crows, which are common and not threatened, may provide a suitable alternative in some instances.