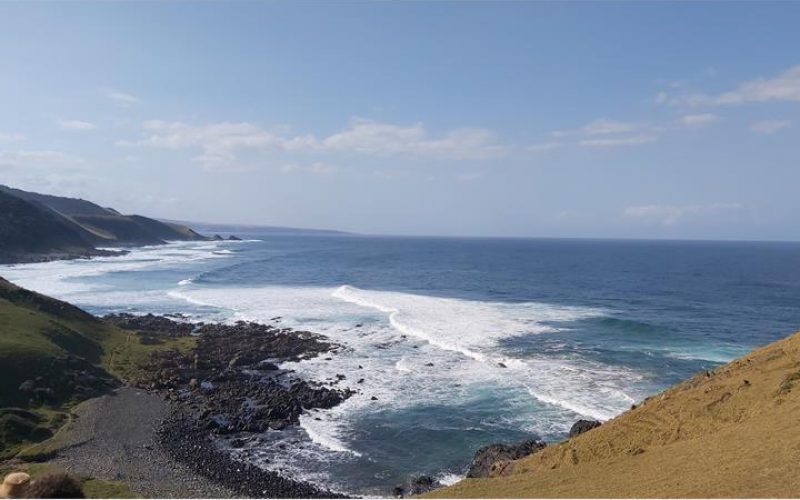 We ramble along the rutted coastline, in and out of pockets of exquisite beaches hugged by cliffs. Shona Aylward reports on Day Five of her Wild Coast hike.

First things first… would you like some weed? A passing merchandiser tries his luck with the group of 10 hikers who have paused for a morning snack under a milkwood tree.

It’s day six of the Wild Coast hike. “Onwards and upwards” was the phrase for the day. The hills just keep rolling in and we climbed them like mountain goats.

“When you are scared of it, you can call it a mountain,” says guide Sinegugu Zukhulu.

We left Kuthwini village early and now the grasslands disappear as we cross a fault line and venture a the land of magical forests.

“When you sneeze in Pondoland, it is said that you grow old, big, wide and tall like a tree in the Goso forest (ukhule ube ngangomthi wase Goso),” says Zukhulu.

We stride past Mboyti, which means “beans” in Xhosa. Zukhulu says the place got its name from a shipwreck which split a lot of beans. 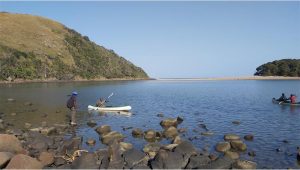 It appears hikers don’t stop and smell all the flowers along the way, and we ramble along the rutted coastline, in and out of pockets of exquisite beaches hugged by cliffs.

Zukhulu, however does make sure his guests become familiar with the area’s indigenous or protected plants.

“The seeds of the ‘Umzimbiti’ tree make such a loud noise that you think a Tokolosh is throwing stones at you,” he says.

We are clocking some 18 plus kilometres in hot conditions. By midday, we reach the prominent “white rock” for lunch.

“The ‘white rock’ (lityelentaka) is also known as ‘the bird rock’.

The rock is white due to the cormorants which perch on it,” says Sinegugu.

We pass great forests, believed to be the best place to listen to birds.

From inside the forest the southern boubou shrike sings to us. We cross the magnificent Munteku River, and head up the last and final hill to Nontsapho ‘Magic Mamma’ Sigqikini’s home in Dakane village.

The group always looks forward to our home stays – it means steam bread, tea, a hearty dinner, breakfast and ultimately rest for our weary, blistered feet.