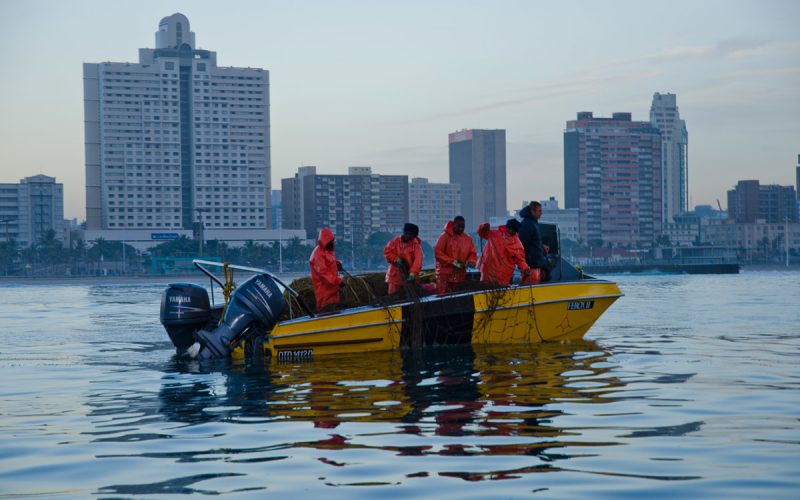 The KwaZulu-Natal Sharks Board has a mandate to protect bathers against shark attacks while minimising the environmental impact. It insists its move to using baited drumlines rather than nets is a step in the right direction.

Whether shark nets and drumlines are necessary to ensure bather protection is a matter of increasing public debate, especially among marine conservationists and others who spend time in and around the ocean.

Many are concerned about the decline in shark populations along the KZN coastline and how the by-catch is impacting other species. At one point shark nets were installed at 37 beaches, from Richards Bay to Port Edward. They had been protecting bathers since the 1960s.

Last year, before the world fell on its head, the KwaZulu-Natal Sharks Board (KZNSB), removed a number of its nets on the KZN coast, replacing these with drumlines. The intention is to reduce the by-catch – species other than sharks unintentionally caught in the nets – and still protect beaches.

But what exactly is a drumline? These are a single, large baited hook on the end of a length of chain or something sturdy. The gaff-sized hook dangles from an anchored float. It’s another way of catching sharks while sparing dolphins, turtles, and the like, which pose no threat to bathers.

The news sent social media into a frenzy. Do drumlines really make beaches safer than nets, some wanted to know. Environmentalists argued that drumlines targeted the predators at the top of the food chain and any other marine animal that happened to take the bait.

Sean Kelly: The call to replace nets with drumlines, was this due to public pressure? Or was it always on the cards?

Greg Thompson: The rollout of drumlines at eThekwini beaches was always on the cards. It is a continuation of their installation on the Hibiscus Coast (lower KZN South Coast) in 2007 and KwaDukuza (Zinkwazi-Ballito) in 2015.

Drumlines must be cheaper than nets, is this the case? Was that a factor?

The implementation of mixed gear (nets and drumlines) was never about a reduction in costs and only an environmental consideration. Keep in mind that drumlines are not cheaper than nets. We still need the same number of boat crews/employees servicing and baiting the gear. Bait is also an added cost.

Are these smart drumlins, like the ones used in Australia?

Drumlines and smart drumlines are different. The drumlines which are used in Queensland and KZN are simple fishing devices with a large baited hook suspended from a large float (originally a drum). A smart drumline, as used in New South Wales and Reunion, is a far more sophisticated system. Whenever a shark is hooked, an alarm is activated which alerts the operator, who then proceeds to sea and can then decide whether to release the animal caught because it poses very little threat to human safety or to allow it to die.

As most catches on both forms of drumlines are at night, smart drumlines would be of little use in KZN as we only have two harbour launches that permit launching at night. Some dangerous animals are released alive from both drumlines and nets in KZN. These include the main target species: white, tiger and Zambezi sharks. This is done because we believe that the released animal will have undergone a very unpleasant experience, struggling on the end of the hook or in the net, and it will then leave the area after being hooked. In most cases, the boat crews will lead that shark offshore and away from the beach before releasing it.

How often are the drumlines checked and what is used as bait?

Drumlines are serviced and baited when nets are serviced, every morning from Monday to Friday and over weekends if sea conditions don’t allow us to service on Fridays.

The drumlines are baited with fish species taken as bycatch in South Africa’s deepwater hake fishery. These are primarily Southern Rover (Emmelichthys nitidus). When this is not available, Jacopever (Helicolenus Dactylopterus) is used. These fish are 300-500gm and one fish is used on a hook.

Have the nets been completely removed? Or are they used in conjunction with drumlines?

All beaches with drumlines, apart from one, also have nets throughout the summer period. Smaller beaches are generally protected by one net and four drumlines. There is only one beach which is protected only with drumlines in summer in KZN, which is Newark Beach in Richards Bay. We do not yet have the scientific data to justify using only drumlines in summer when our Zambezi shark catches are highest and when the incidence of flooding rivers is also highest. Hence the reason we refer to our shark safety devices as mixed gear. During the sardine and whale migration during winter, nets are removed from some beaches and replaced with extra drumlines, to avoid mass captures and whale collisions and captures.

Is the public at greater risk since the removal of some of the nets?

Our core mandate is to protect bathers from shark-related incidents. We would not make changes to our gear, such as the introduction of drumlines, if we thought the public were at greater risk. We have been using mixed gear in the Ray Nkonyeni, KwaDukuza and Umhlathuze municipalities for many years without any shark-related incidents taking place. The last incident at a protected beach was on a surfer at Umtentweni in 1999, long before the introduction of drumlines, and prior to that at Ballito in 1980. 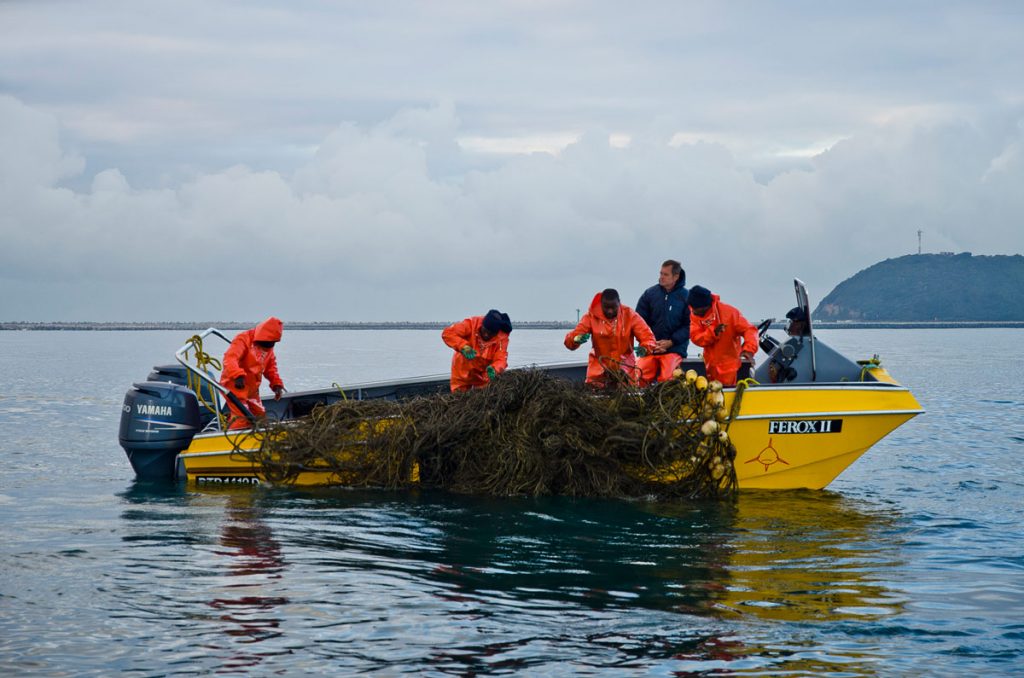 NET ASSET: Sharks Board crew examine their nets off Durban. The board has replaced some nets with drumlines on a number of beaches on the KwaZulu-Natal Coast. Pictures: KZN Sharks Board

What would happen to anyone caught tampering with the drumlines?

All the local skiboat clubs are aware that the gear is in place and it is the property of the Sharks Board or municipality. If any tampering is reported, we trust that club commodores will deal with the matter internally.

What is the standard operating procedure with decisions like the one to swap nets for drums?

Any changes to the gear are made after extensive deliberation among operations management and after consultation with our senior scientific staff, who will present details of catches at the beaches under consideration. As service providers, the KZNSB then presents these changes to the respective municipalities for their input.

Talk us through what happens to shark’s post-capture where they are found alive vs when found dead?

When a dangerous shark is found alive on a drumline, the trace is detached from the drum and the animal is secured and slowly taken out to sea well away from any bathing area. It is then tagged and released.

Exactly how many drumlines are in the water?

There are now 177 drumlines in the water between Richards Bay and Port Edward.

Beyond risk management, what does the Sharks Board do that the public may not be aware of?

The KZNSB has been actively pursuing the development of alternative methods of shark mitigation. This has involved developing an electrical shark repellent cable system, based on the well-known fact that sharks are extremely sensitive to electrical fields. We are hoping that such a cable can be deployed to protect bathers at popular swimming beaches.

A 100m long shark repellent cable system was tested at Glencairn, Cape Town, in 2015-2016. Additional tests were conducted with a shorter version of the system at Mossel Bay during 2017. Both tests yielded positive results. At Mossel Bay white sharks were repeatedly repelled by the electrical field. The KZNSB has recently contracted the Institute of Maritime Technology, a subsidiary of Armscor, to design and build a pilot study, 400m-long modular shark repellent cable. This will be tested locally and internationally in late 2020.

Covid-19 must have presented some challenges. What protocol was followed?

With regards to the Covid-19 lockdown, all municipalities were forced to close beaches and ban bathing and surfing. Therefore we removed all of our shark safety gear from Richards Bay to Port Edward. We had no gear in the water when the sardines arrived in our waters. To date, we are waiting for a directive from the municipalities to reinstate the gear at all beaches.

Is this all necessary? Would the Sharks Board continue to operate if nets or drumlines were not in use?

The reason nets were installed in Durban in 1952 and along the rest of the coast in the early 1960s was that shark attacks at popular recreational beaches were adversely affecting coastal tourism. The KZNSB has been so effective in reducing these incidents that people forgot that such a problem once existed. Since 1952 there has been no shark-induced fatality at any protected beach on the KZN coast and there have been only four serious injuries.

Protection against shark attacks is now regarded as an integral component of the tourism infrastructure of KZN. The KZNSB was formed in 1964 and was charged with the duty of approving, controlling and initiating measures for safeguarding bathers against shark attack (Natal Ordinance No 10 of 1964). It has taken over the installation and maintenance of all shark safety gear in KZN. The KZNSB’s core function is bather protection. If the politicians decided to abolish all nets and drumlines, the KZNSB would, in all likelihood, close down.

When looking into the historical shark attack data, the use of traditional drumlines and shark nets do markedly reduce the incidence of a shark attack when implemented on a regular and consistent basis, although this comes at an unavoidable cost to marine life.

What are the alternatives?

Other cruelty-free management systems are being developed, such as helicopter patrols, broadcasting orca sounds underwater, electronic deterrents, drones, the Eco Shark Barrier and even smartphone applications which use social media to advise the community of where sharks are spotted.

Ultimately it would be better for our marine environment if the whole South African coastline had effective, non-lethal solutions such as Shark Spotters (the Cape Town initiative that uses lookouts and flags to warn of sharks) and exclusion barriers.

Reducing nets and employing drumlines is a progressive move from the Sharks Board in an attempt to reduce the environmental impact of the system they have in place. So long as the programme achieves its primary goal of protecting bathers (and yes, surfers) from sharks and not sharks from us.

As seen in Reunion, a consistent spate of shark attacks is not just radically detrimental to tourism but also to the ocean-based lifestyles that literally, give our lives meaning and deliver so much happiness and enjoyment. Not to mention the many industries and economies that thrive around them.

Sean Kelly: There have been no shark attack fatalities in KZN since 1952, but that has come at the expense of the environment. Surely our goal for the future must be to maintain that safety record while protecting our marine life. Drumlines, perhaps, are a step in the right direction while less harmful alternatives are explored.

Sean Kelly – @the_sharkman –  was one of seven winners in a recent writing competition on sharks and rays run by Roving Reporters. The competition was supported by WildOceans, a programme of the WildTrust, which facilitated access to conservation-minded youth keen to share their passion and develop writing skills with mentorship from Roving Reporters. The opinions and views expressed in this Ocean Watch series are not necessarily those of the WildTrust.

Kelly is a freelance copy and feature writer as well as the online editor for Zigzag Surf Magazine, Africa’s foremost surf magazine. Sean holds an Honours degree in Environmental Management from Stellenbosch University. Before joining Zigzag he was employed as the skipper and field coordinator at the South African Shark Conservancy.

Now read… Spotted! How a surfer’s project turned the tide on shark fears