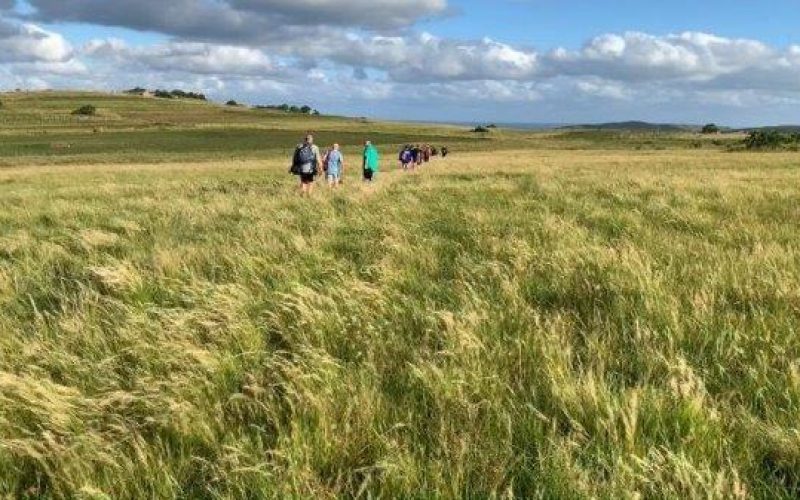 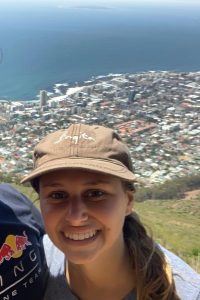 Natalie dos Santos is among a cohort of young marine biologists  and intrepid Roving Reporters embarking on expeditions and hikes to promote alternatives to heavy minerals mining along South Africa’s wild coast.

An associated Kydrin Foundation fundraising campaign, Wild Friends, has so far raised R50,000 to promote eco-tourism in the area and enrol young environmental scientists and writers on Wild Coast hikes and trails.

“We need to inspire people to leave this world in a better place for generations to come by protecting the few remaining wild spaces, including this 22km stretch of wild coast earmarked for heavy minerals mining,” said Roving Reporters director, Fred Kockott.

To highlight the issues at stake, Kockott had organised a daring feat. He invited a crew of ten ocean adventurers to join him in swimming this 22 km stretch of Wild Coast.

Given the risk of shark incidents, a comprehensive safety plan was in place, including safety divers and kayakers, a jet ski rescue operator, support boats, paramedics and a team doctor. But torrential floods on the eve of South Africa’s first democratic elections put paid to all this.  With rivers spilling their guts into the sea, the safety team declared it unsafe to venture into muddy and turbid waters – ideal feeding grounds for the much-feared bull shark.

So, the wild swimmers set out on foot. Over the next five days they immersed themselves in the local community, crisscrossing the five proposed mining blocks of Xolobeni Mineral Sands Project and exploring the pristine estuaries of the Pondoland Marine Protected Area. 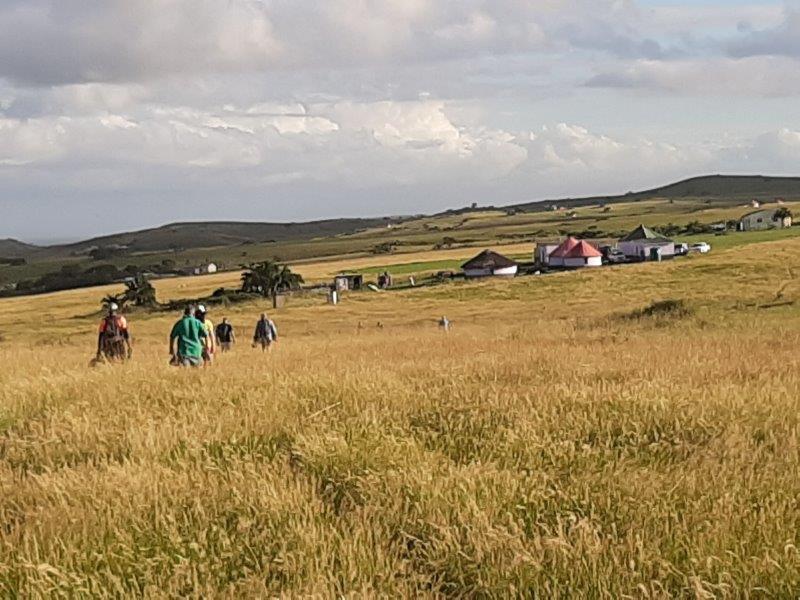 The Wild Friends fundraising campaign has so far raised more than R50,000, half of which is to be awarded to Sustaining the Wild Coast to develop home-stays along the 22 km eco-tourism route

“We rumbled – and tumbled at times – through this flooded, muddy, sparkling land, river and seascape. Yes, it was an adventure, but we also picked up the underlying story of jobs and mining, and conflict and tensions large and small,” said Mike Loewe, the night news editor at Daily Dispatch.

Knowing the swimmers were still hungry for adventure, Wild Coast trail guide, Siyabonga Ndovela, led the swimmers down steep gorges and ravines to places few people have visited. This included the foot of Mnyameni falls in full flood. Amid the churning waters and smoking and stinging spray, the team enjoyed a wilder swim than any had anticipated. Then, on the last evening, an end-of-hike bathe in crystal, clear waters that cascade down huge cliffs into the Mtentu estuary. 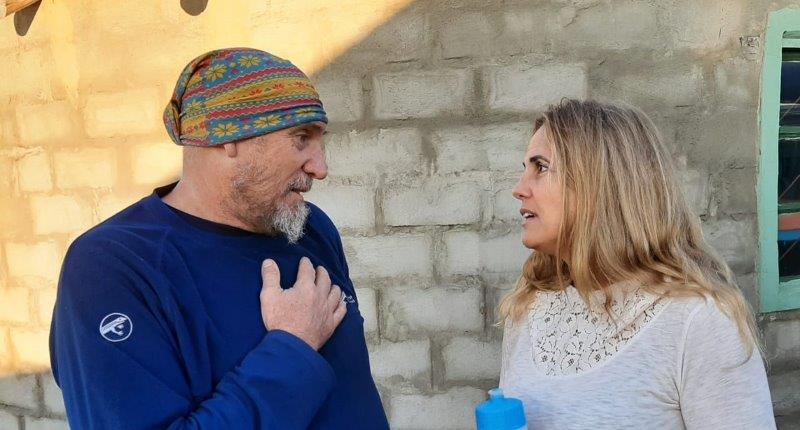 That night, amid aching limbs, swollen feet, stubbed toes, cuts, bruises and scratches, the travellers revelled in an unbridled sense of awakening. Not even the pain of a dislocated shoulder from a kayak carrying episode down the steep Mtamvuna gorge, could subdue the shared exuberance. 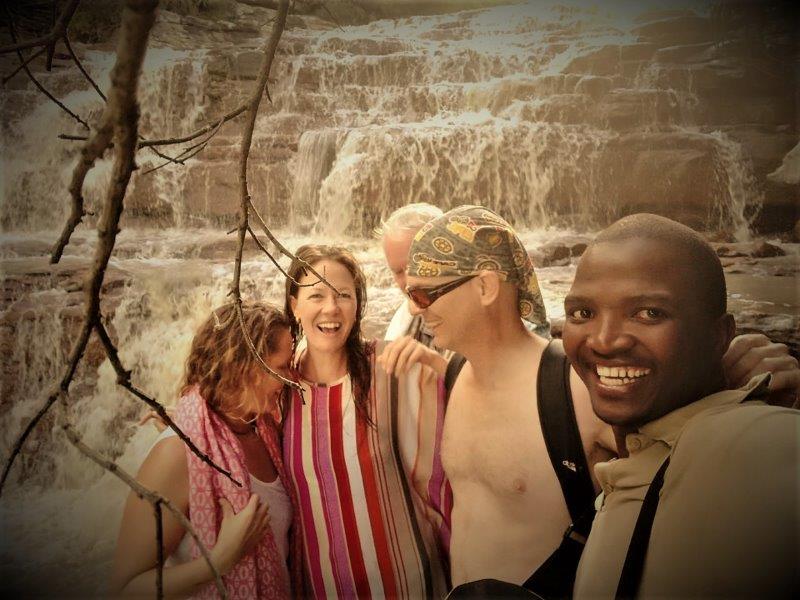 “An almighty seed had been planted in all our minds, but we did not know what to with it,” recalled lead safety diver, Cera-Jane Catton.

“It was a moment of discovery,” said Mike Loewe, the night news editor at the Daily Dispatch.

“People must be at the edge of issues, the front line of conflicts, to grasp the facts and intuitively understand the deeper stories,” said Loewe. “What better place to do this than here on this rugged, conflicted but beautiful and relatively undisturbed part of the Earth. We realised, in this flood-ravaged, mining threatened community, we could make media magic.”

Loewe has since set in motion plans for Roving Reporters first Rugged & Wild Envirocamp in September.

In the meantime, marine biologist Natalie dos Santos, sets off on Sunday on her first sponsored Wild Coast hike alongside Roving Reporters intern, Mlu Mdletshe and writing mentor, Matt Wilson. Their mission is to produce a short documentary proposal for the N.E.W. Pitch Awards that take place at the Nature, Environment and Wildlife Filmmakers congress in Durban’s Botanical Garden from July 14 – 17.

Dos Santos said until she read about Roving Reporters Wild Swim expedition, she was unaware that a northern section of the Wild Coast had been earmarked for mining of heavy minerals mining

“I want to learn more about the potential impacts that mining may have on the environment and local communities. More importantly, I would like to learn of ways I can contribute to the protection of this area,” said Dos Santos, a WildOceans’ Ocean Steward, currently completing completing her final year study for a BSc in Marine Biology at the University of KwaZulu-Natal.

“So, I relish this opportunity to explore this beautiful area by foot whilst learning from locally-trained guides and gaining knowledge in environmental journalism. I have always believed that scientific papers and statistics mean little to people in our attempts to raise awareness of ocean conservation or to inspire change to sustainable ways of living,” said Dos Santos. 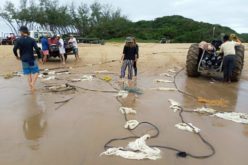