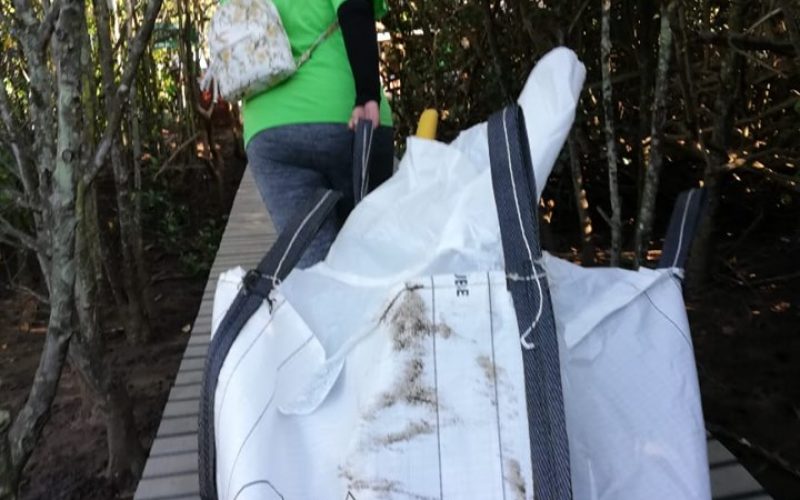 Volunteers are clearing storm debris from Durban’s beaches. They tackled the Beachwood Mangroves at the weekend and are now turning their attention to Toti and the city’s central beaches

More than 150 volunteers have cleared tons of trash from the Beachwood Mangroves Nature Reserve. The 11 May cleanup comes in the wake of the storm that devastated parts of KwaZulu-Natal after the Easter Weekend. Flooding claimed at least 70 lives, destroying millions of rands in infrastructure and dumping mountains of debris on beaches in the province. 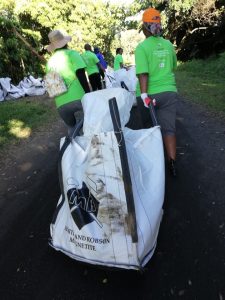 HEAVY GOING: Volunteers drag bags of waste along the boardwalk at the Beachwood Mangroves Nature Reserve during a cleanup.

Basil Pather, conservation manager for the reserve, said the floods added considerably to the waste normally brought down by the Umgeni River. Sheets of plastic, sacking and car body parts were among the trash smothering the aerial roots of the white mangroves, he said. Nursery Crabs, birds and other burrowing animals were affected by the debris too, said Pather, who pointed out that the mangroves, on the northern side of the estuary, were a nursery for fish. Lindsay Hopkins, project director with Waste Action Tribe, which coordinated the cleanup said a vibrant, young crowd got stuck in, spending about three hours filing about 50 one-cubic-metre bags with waste. It was heavy going, at times, she said, as the volunteers, including members of the Wildlife and Environment Society South Africa, Wildlands, and the Litterboom Project, dragged the rubbish to where it could be put into trucks. Recycling Hanno Langenhoven, of conservation organisation Wildlands, said the waste was taken for sorting and recycling at their centre in Cato Manor. Pather praised the efforts of the volunteers. “If it wasn’t for the help of civil society we would not have got it back to normality,” he said. The cleanup continued the following day, on 12 May, across the river at Country Club Beach, where the promise of tickets to the Nedbank Cup football match in Durban on 18 May – provided by the 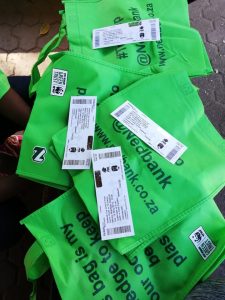 BOOTY: Reusable shopping bags and football tickets – gifts for the volunteers from sponsor, Nedbank.bank, a sponsor of the cleanup – galvanised scores more volunteers. Snowballed Hopkins told how she managed to rope a few municipal workers into the initiative and soon things snowballed. “Then firemen in three trucks arrived for a run on beach. Even law enforcement came. I stopped ice cream sellers. I said come and get yourself a football ticket. They helped us… lifeguards came one by one… volunteers, passersby, a few policeman,” said Hopkins. She said they all received a ticket to the football in exchange for collecting a few bags of waste. From 8am to about 1pm the volunteers were able to fill about 100 one-cubic-metre bags, which were taken for recycling. Cleanup continues The cleanups continue on 15 May at Toti; 17 May at Addington Beach; and on 18 May at Blue Lagoon, with ticket giveaways, free T-shirts and reusable shopping bag for volunteers. Hopkins said they had collected plastic and other waste at the Umhlanga estuary in early April and would like to return but logistical problems needed to be addressed. — Roving Reporters The Beachwood Mangroves Nature Reserve, under the care of Ezemvelo KZN Wildlife, is open to the public on the third Saturday of each month from 8am to 1pm. An elevated boardwalk makes it easy to explore the natural beauty spot.
Categories: Environment, Ocean Watch
Tags: Basil Pather, Beachwood, birds, Cleanup, damage, Floods, Lindsay Hopkins, Mangroves, Nedbank, Storm, umhlanga, Waste Action Trribe 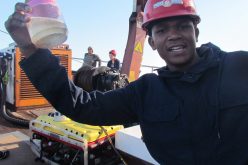