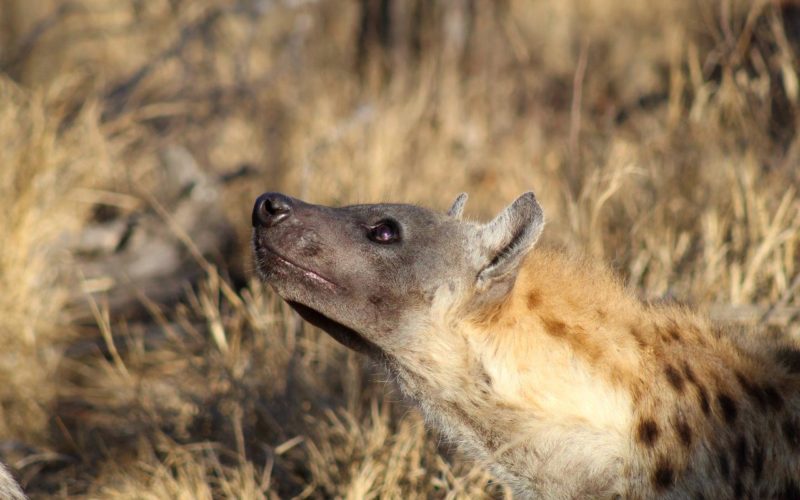 HYENA GAZE: Hyenas are not geared for climbing. They do not have retractable claws like leopards. So imagine a young photographer’s surprise when she came upon a hyena jumping out a tree in ThornyBush Game reserve. It was a moment 19-year-old Nothando Mkhombo, will never forget - but a shot she missed. Photo: Nothando Mkhombo.

Capturing memorable wildlife moments on camera is sometimes the stuff of heartbreak, hope and missed opportunities. Alexandra Howard chats to five young women who cut their photographic teeth in the Kruger. 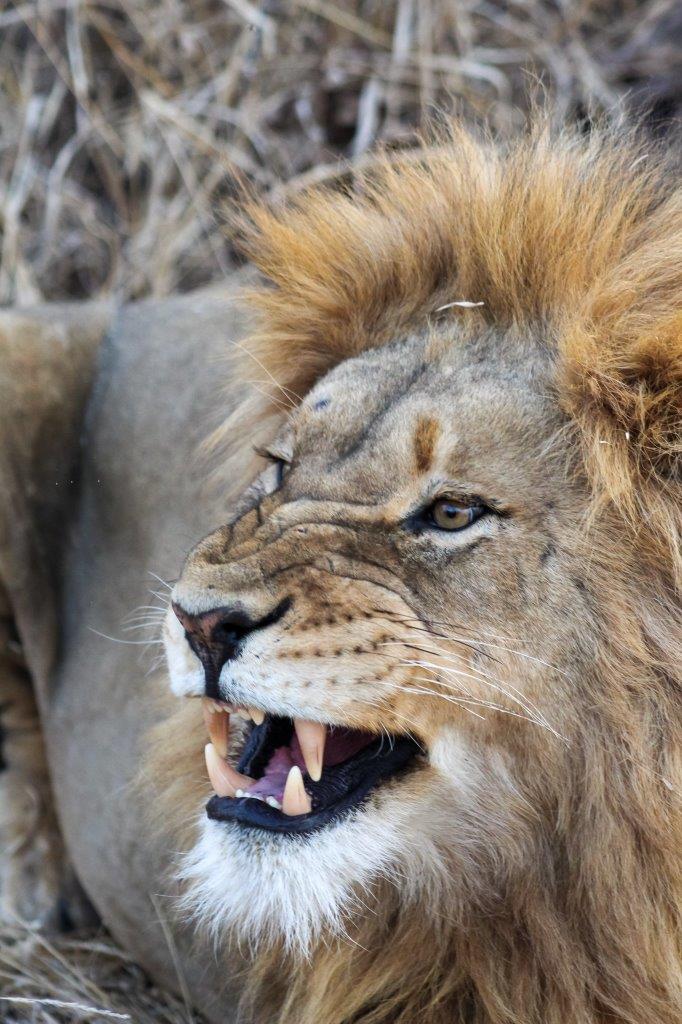 THE CAT’S WHISKERS: Teeming with game, including about 1,600 lions, the Kruger National Park has long been a prime destination for wildlife photographers from all over the globe – mostly white men. But times are changing. This photo was taken by 23-year old Karabo Magakane, who is now a South African ambassador for the international Girls Who Click programme. The initiative inspires and empowers teen girls to use photography to further conservation efforts around the world.

Hyenas are many things: great hunters; clever like a fox; and possessed of some of the most confusing genitalia the animal kingdom has to offer. But what they are not noted for is their tree-climbing prowess.

So you can imagine Nothando Mkhombo’s regret when she thinks back to the time she spotted a female hyena jumping down from a tree in the Thornybush Game Reserve, Limpopo, too engrossed in the moment to tear her eyes away to record it on camera.

“I wanted to take that shot, but I couldn’t because my eyes were focusing on that!” says Mkhombo, fascinated by the scavenger’s behaviour and its somewhat outré wedding tackle: a 15cm-long clitoris that looks like a penis, complete with labia that resemble testicles. (Incidentally, hyenas give birth to cubs through their narrow clitorises).

“I never knew these weird things about hyena before,” says Mkhombo.

The 19-year-old photographer from Acornhoek, a sprawling village to the west of the Kruger National Park, has found much else to marvel over, too, and some food for thought about conservation, ever since enrolling with Wild Shots Outreach. A not-for-profit environmental education programme, it uses photography to engage with young people living near Kruger who often had little experience of wilderness areas or access to the park while growing up.

Most of the participants, many of whom are unemployed, have grabbed the opportunity to get to know their natural heritage. Mkhombo is no exception and her growing love for wildlife proves infectious as she tells me about her first sighting of a herd of elephants and how it left her speechless.

Mkhombo says her dream photograph would be of her favourite animal, the rhino – but one that hasn’t been dehorned. Since she started her training with Wild Shots Outreach in 2020 and began going on game drives in Kruger and neighbouring private reserves, she has yet to see a rhino with its horn as nature intended it.

While wildlife photographers rightly prize unusual sightings and dramatic encounters, it’s the details of individual animals as viewed through the camera lens that really inspire Mkhombo. One of her favourite photographs (this time, one that didn’t get away) came thanks to being close enough to zoom in on a giraffe’s tail. Individual hairs and numerous scars give the hide pattern an almost abstract quality. 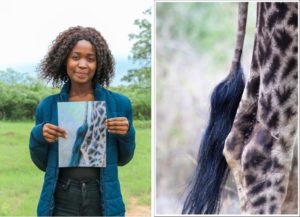 Mutateki Ubisi, also of Acornhoek and a fellow Wild Shots graduate, recently qualified as an animal health technician. She trained to assist veterinarians and scientists with animal disease control, laboratory testing and treatment. Now the 29-year-old plans to pursue field guiding as a career so she can, “be in the bush full time to take all the photos I want”.

She wishes she could go back in time to her first game drive when she was lucky enough to see Thornybush’s infamous one-eyed male lion, the gigantic Mapoza with his milky blue right eye, up close – yet failed to take a photograph.

Ubisi is a lot more trigger-happy these days. She keeps her camera nearby and ready to focus at all times and says she would even resort to using her cellphone if a SLR camera wasn’t at hand: “You want to capture the moment in your heart, but you want to have something you can treasure.”

Ubisi, like Mkhombo with her close-up of a giraffe’s tail, hopes to record the texture of an elephant’s toenails. She believes detailed shots can change how we see things.

Mukateki Ubisi with her own print of an elephant (Ndlopfu) grazing, and (right) a treasured photo of two young hyenas she captured on camera. Portrait photograph: Rifumo Mathebula.

Jabulani Justine Maluleke is determined to shoot an aardvark, but the elusive ant-eaters seem bent on evading her camera.

The 33-year-old was so surprised when she saw one of these long-snouted creatures for the first time that she completely forgot about photography. Now, a total of four all-too-brief aardvark encounters later, and the excitement burns brightly, but Maluleke is no closer to getting that shot.

A junior marketing, fundraising and media relations official at the South African Wildlife College in Hoedspruit, Maluleke finds the nocturnal animals fascinating, remarking that few people get the opportunity to see them in the wild, never mind to photograph them.

Every now and then there are those moments in photography that steal your breath away. And so it was for Karabo Magakane while on a game drive as part of a Wild Shots Outreach advanced photography course.

She had been enjoying the early morning drive with the soft sunlight providing ideal conditions for photography when her party chanced upon a herd of elephants feeding peacefully in thick bushveld.  Suddenly, out of the corner of her eye, Magakane spied a couple of bull elephants engaged in a lively bout of who’s-your-daddy. The big males pushed and shoved each other with their tusks in aggressive bursts and Magakane was so engrossed that many months later she remained at a loss to do the clash justice in words – or pictures.

The 23-year-old, who is now training as a student pilot, hopes one day to combine careers in flying and photography so she can catch her dream shots of lions, elephants and antelope, silhouetted on the Serengeti plains.

Magakane seeks to illustrate bigger stories through simple images. She photographs with her village in mind, aiming to show neighbours, friends and others what they’re missing.

She believes good photographs should prompt the viewer to wonder about the story behind it. She wants to grow as a photographer so she can bring light to conservation issues and encourage more young people and women to pick up a camera or to get involved in wildlife industries.

HAIRY EYEBALL: Karabo Magakane with a print of one of her photographs – an elephant’s (Ndlopfu) eyelash against a yellow background of the bushveld. Portrait photograph: Rifumo Mathebula.

Field guide and Wild Shots graduate Queen Manyike sighs when asked about the great wildlife shots that slipped through her fingers, including timeless images of leopards lazing in tall trees after devouring their kill. She occasionally leaves her camera at home for her family to use and so it was that she missed out on recording her first sighting of elephants, swimming and playing in the water, while out with guests.

The 26-year-old featured in the award-winning documentary film, Beyond the Fence, which tells the story of how photography helped three Wild Shots graduates become leaders in conservation and mentors to their communities by overcoming the metaphorical and physical fences surrounding them.

SAVANNA STORIES: Queen Manyike with her Wild Shots Outreach sponsored camera and (right) one of the many stunning pictures she has taken of cheetahs (Xinkakaka) enjoying the marula and knobthorn tree savannas in the Kruger National Park.

Manyike is determined to carry on breaking down barriers in her community by involving herself in environmental education. And she hopes photography will provide a connection through which she can persuade others to look at conservation differently.

Mankiye has been appointed, alongside Karabo Makagane, as one of 14 international ambassadors of the Girls Who Click programme. They were selected from over 160 applicants worldwide to help mentor teen girls interested in nature photography – a sector traditionally the domain of white men. 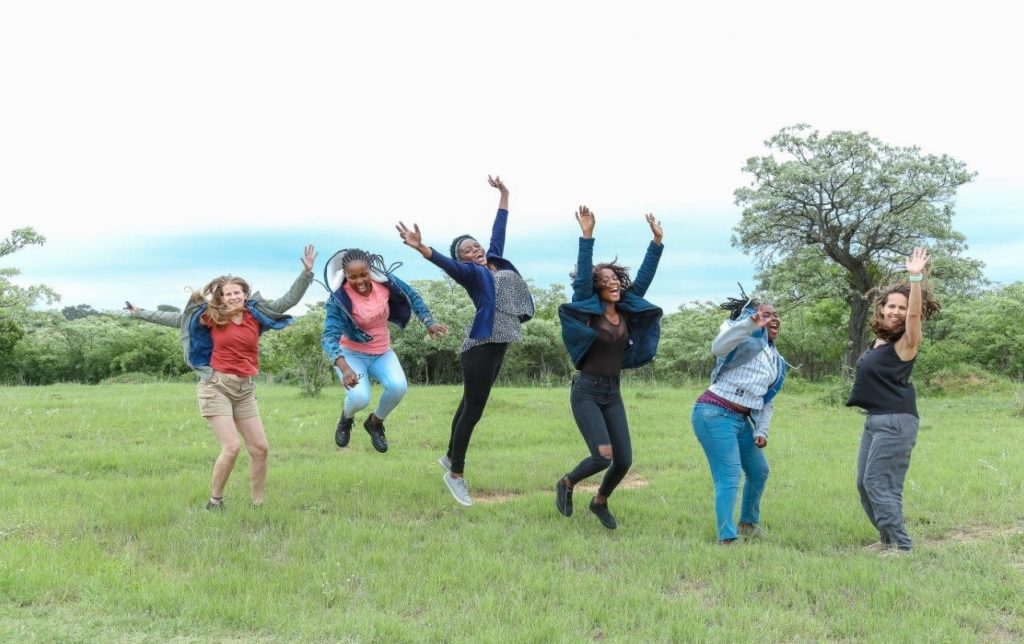 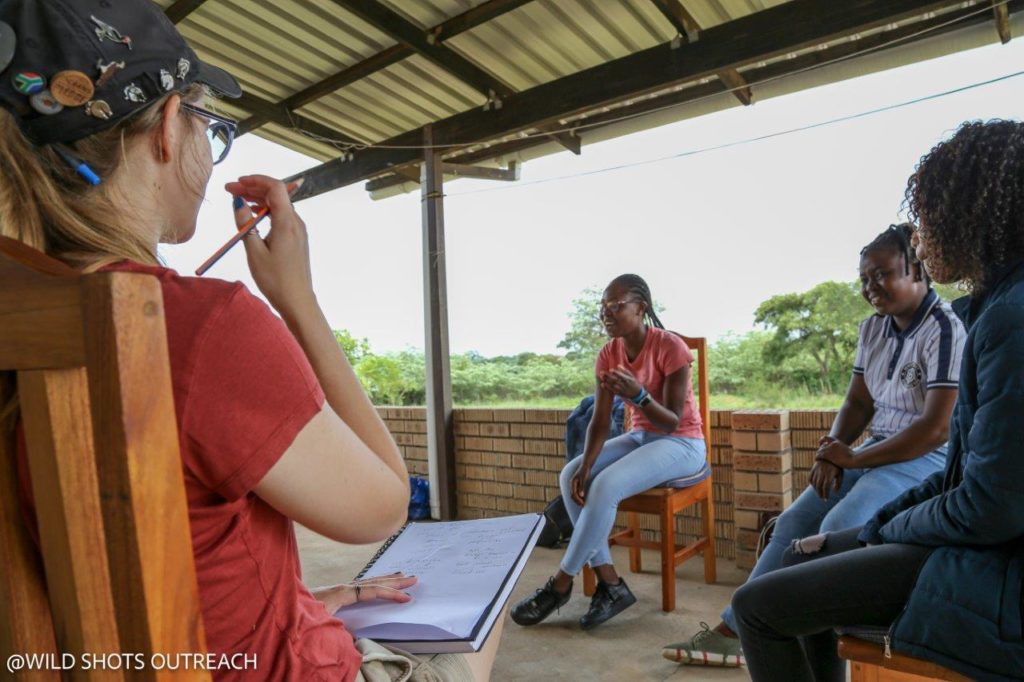 Each of the five Wild Shots women I met see things a little differently. Their reasons for photographing are as diverse as their personal stories, but they have a common goal – to share the beauty of our natural heritage and motivate people to care about wildlife.

“We want to inspire people, especially the youth, to get involved in conservation and ultimately help counter poaching and the illegal wildlife trade,” says Maluleke.

“It’s a serious problem,” adds Mkhombo, yearning for the day when rhinos are no longer at risk because of the illegal trade in their horns. – Roving Reporters

The ones that didn’t get away…

Here are some wildlife moments that did not escape the five women’s lenses compliments of Wild Shots Outreach. 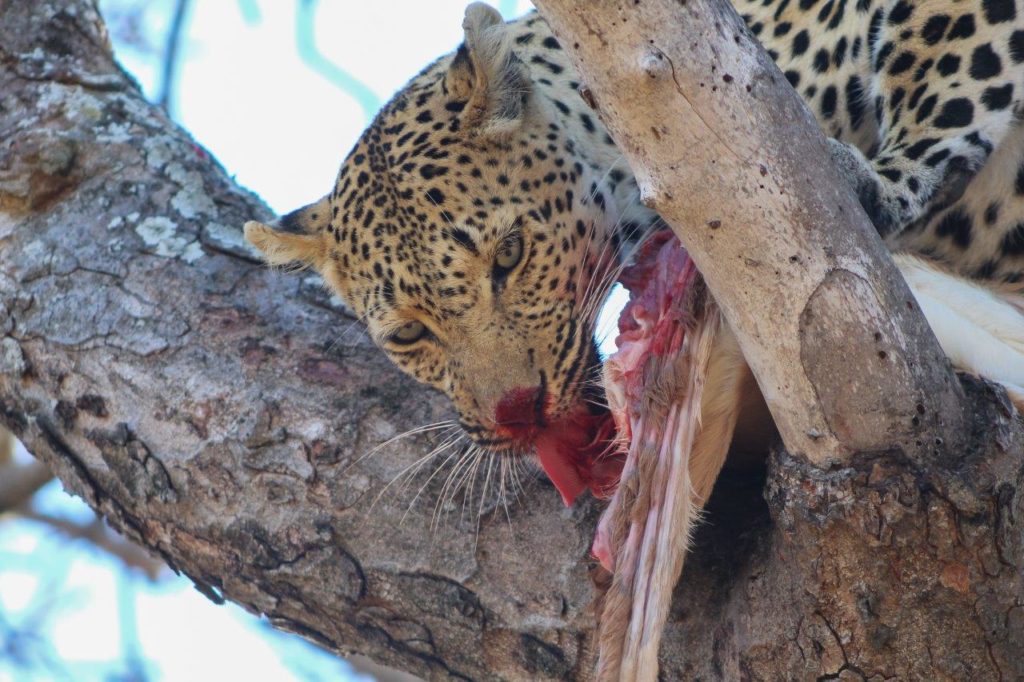 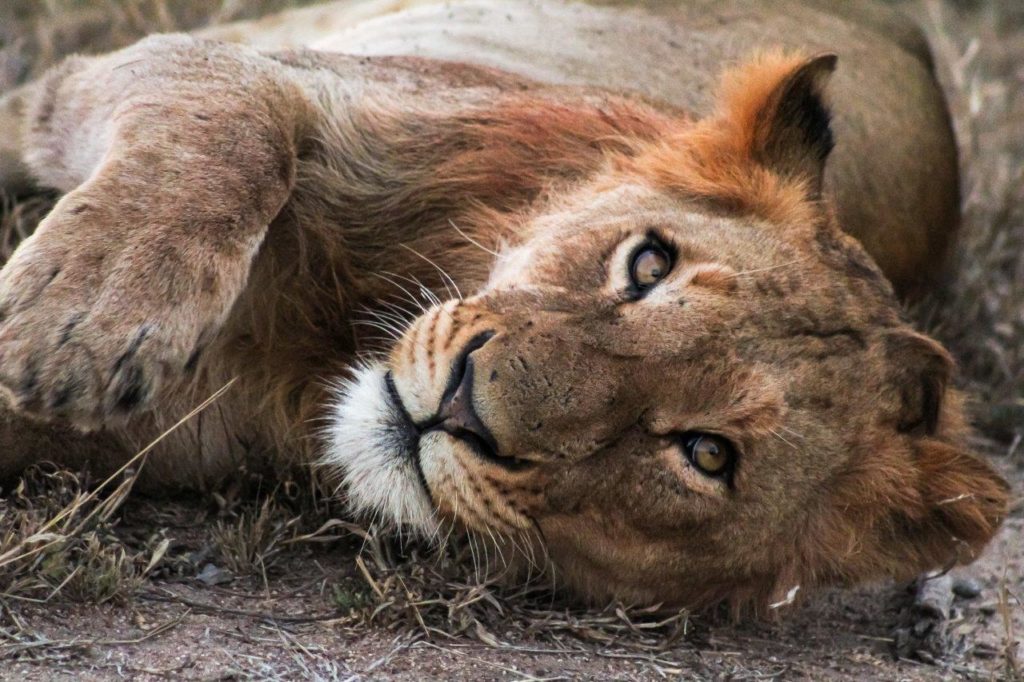 CURIOUS: A young male lion turns his head at the sound of the shutter clicks, giving photographer Justine Maluleke the eye. 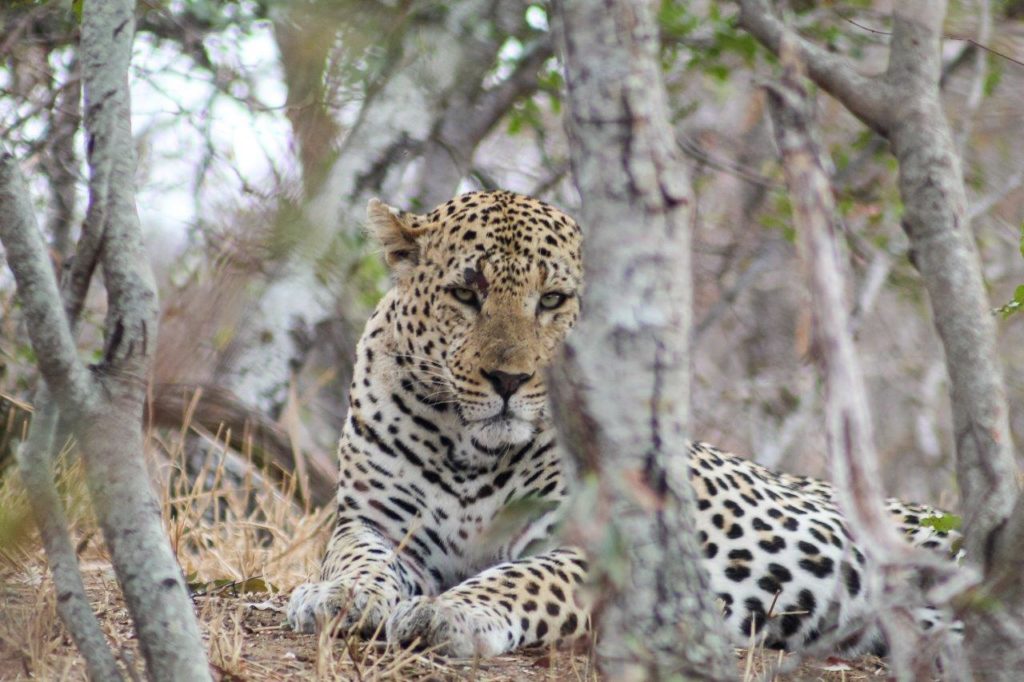 BATTLE SCARRED: This impressively scarred male leopard did not even attempt to conceal himself from photographer Karabo Magakane 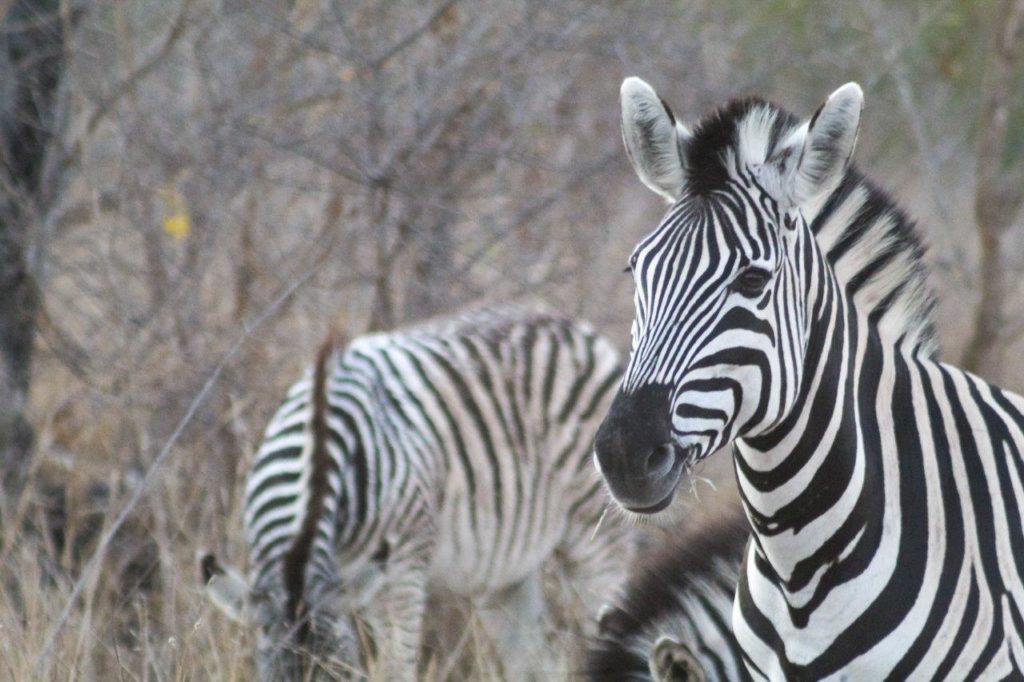 MAIN MAN:   Fashion fundis might be left wondering if this zebra visited a nearby bushveld salon. Photographer Nothando Mkhombo zooms in on black and white detail. 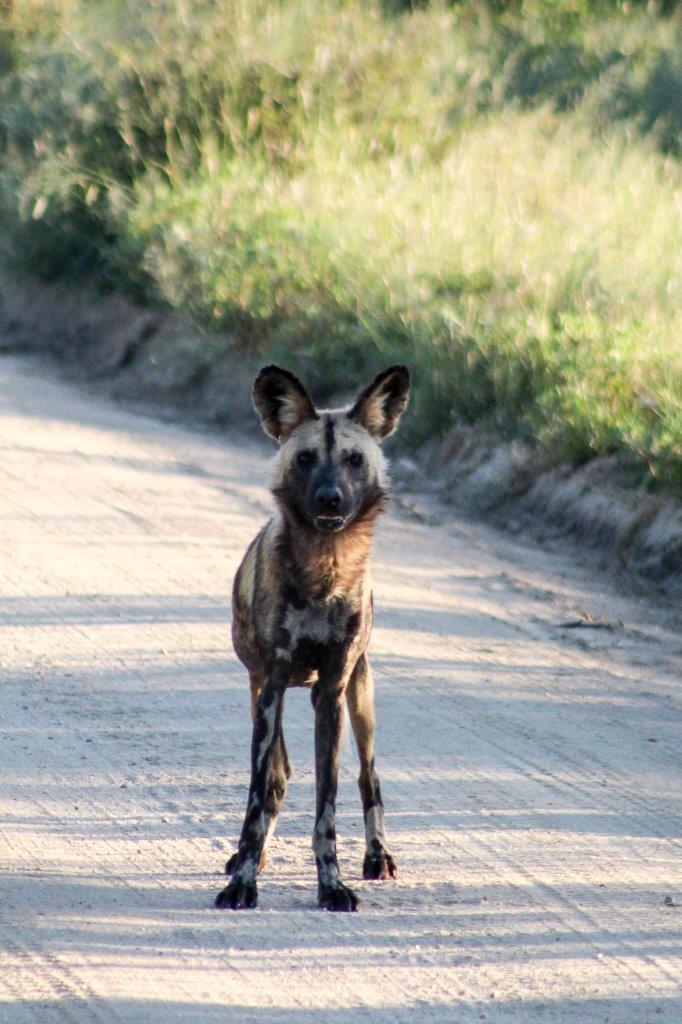 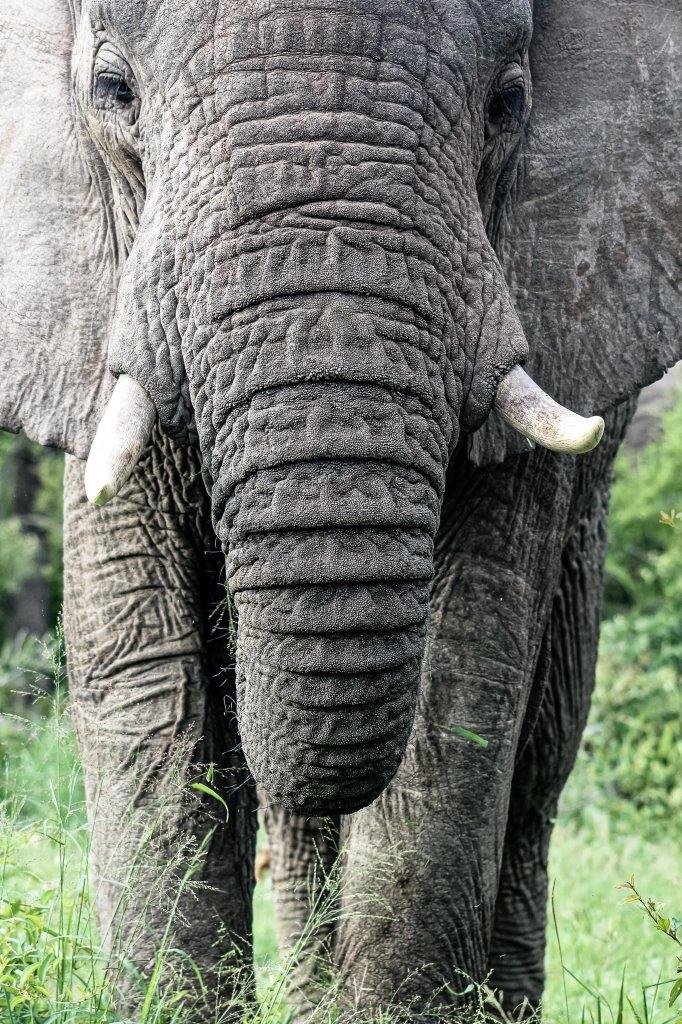 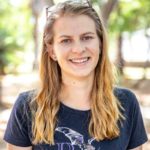 The writer, Alexandra Howard, is a zoologist working on a PhD about the ecosystem services of bats. This story is free to republish. It forms part of a series of stories arising from the Khetha Journalism Project. Supported by USAID and developed by WWF-SA, WESSA and Roving Reporters, the training project explores the broader context of wildlife trafficking and examines ways to counter its impact in and around the Greater Kruger National Park.

The shot that got away

Hyenas are not geared for climbing. They do not have retractable claws like leopards, which make it easy for the agile cats to hoist freshly killed carcasses high into trees, out of reach of hungry hyenas. Imagine then, a young photographer’s surprise when she came upon a hyena jumping out a tree in ThornyBush Game reserve. It was a moment 19-year-old Nothando Mkhombo, will never forget – but a shot she missed.