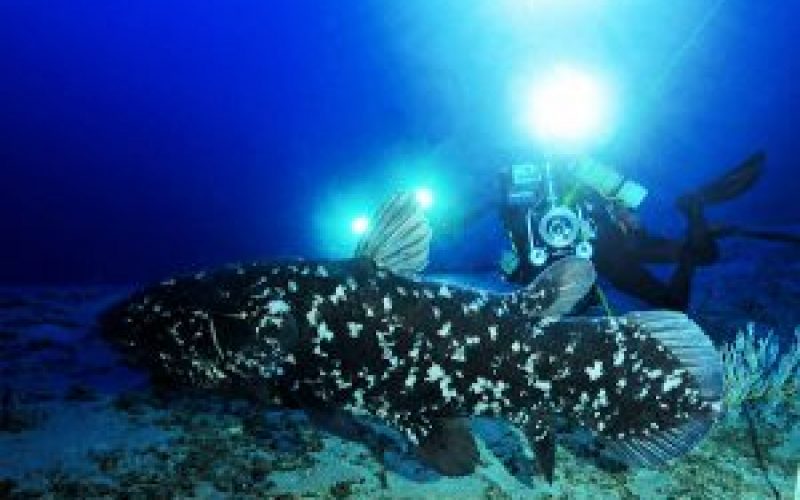 The coelacanth, once thought to be extinct, has become the rock star of ocean science, says leading marine biodiversity expert, Dr Kerry Sink.

Delivering an animated presentation outlining what we know about coelacanths so far, Sink lived to up to her reputation for innovative thinking and groundbreaking conservation during a two-day Ocean Stewards Science Session hosted by Grindrod in Durban this week.

The first coelacanth was discovered in 1938 among a catch of a local fisherman in the Eastern Cape. Sink said that from a scientific perspective this discovery was almost like “finding a dinosaur in the Karoo”.

Prior to that, the science world thought this prehistoric fish – “Old Four Legs” as dubbed at the time – only existed in fossilized form, images of its limb- like pectoral fins giving rise to theories that it might be the origin of terrestrial species.

Sharing her fascination for this “charismatic dinosaur fish”, Sink said the coelacanth had played a critical role in deepening the horizons of ocean science, consistently revealing how people often cling to long-held scientific assumptions only to discover that they were not true.

“We now know that coelacanths never walked,” laughed Sink. “Those pectoral fins are for rotation in water.”

Sink was delighted by this week’s discovery of near Grahamstown of more than two-dozen complete fossils of juvenile coelacanths in what was believed to have been an estuary in 360 million years ago.

This latest find suggests that coelacanths had used the estuary as a nursery.

This was not scientists had expected, said Sink.

We know that coelacanths give birth to live young, about 30 centimetres at birth, but we are clueless as to where they go to have their young,” said Sink.

Sink also argues that coelacanths are not as rare as they are commonly believed to be.

The first recorded sighting of a live coelacanth was in October 2000 off Sodwana Bay at a depth of 104 metres. The late Peter Timm and two other divers were exploring a deep water canyon off Sodwana when they saw what they first thought were three large potato bass in a cave.

“We had a big underwater torch. We saw some pink eyes reflecting back at us. We swam over to investigate. They were coelacanths,” recalled Timm in a media interview.

Sink said this sightings had renewed interest and funding for deep sea research, leading to the mapping of sea bed, associated biodiversity studies and the discovery of a host of deep water canyons in which coelacanths thrive along South Africa far northern eastern shores.

Assisted by Remote Operating Vehicles (ROVs) with submersible cameras, Sink can now talk fondly of more than 36 coelacanths that she is now monitoring, each one given a name and easily identifiable by different markings.

“This one, Jessie, has a star in her cheek. I have been following her for 14 years,” said Sink.

And Sink believes there could be other species in the ocean depths never heard of before.

“We need to get down there more often. We need the knowledge of the deep sea to make good decisions. The truth is we know more about outer space than we know about what’s happening in the oceans,” said Sink. – Roving Reporters