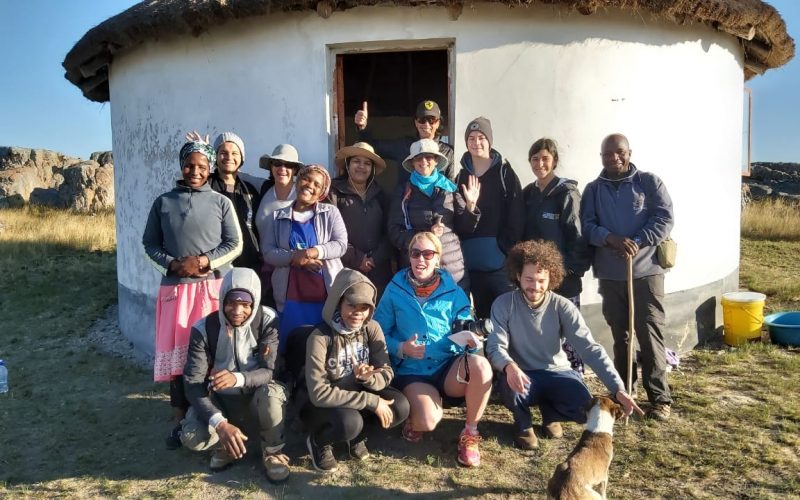 South Coast Herald journalist Shona Aylward meets one of Winnie Madikizela-Mandela’s grandsons and enjoys being guided by a true gentleman on the first day of her Wild Coast hike.

Children dance and chant traditional songs to raise money to buy school shoes, while a hungry dog with its nose to the ground searches for scraps. The sun is setting behind the distant hills, leaving a golden glow to the sky. It’s been a relatively long day.

The group of 10 hikers have walked some 15 kilometers along the beach – setting out from the Wild Coast Sun, making their way through the first two sections of coast earmarked for mining to an inland homestead in Mtolani village.

It is there under a dark sky scattered with hundreds of diamond-like stars they huddle in a hut, tucking into traditional food and sleeping on mattresses on the floor.

The others are Tanya Schoeman from Pretoria, Bonny Jennings with her sons Alex and Jez, Lara Hood and her son, Jessie from Gauteng and Patil Khakhamian from Lebanon. 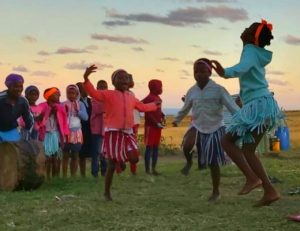 The group is fortunate to have Sinegugu Zukulu walking with them. Sinegugu is a dynamic tour guide, who has spent most of the first day sharing his vast wealth of knowledge about indigenous plants, birds, the Mzamba fossil beds, the red desert and the ancient traditions entrenched in the communities of the Wild Coast.

Sinegugu is a true gentleman, and makes sure his guests are comfortable, and enjoy the journey. He grew up in the foothills of Mnyameni and has many fond childhood memories of growing up in the area. He later became a geography teacher – a career path he followed for 14 years and which included an eight-year stint at Kearsney College.

“I stopped teaching as it wasn’t challenging me anymore, but a love of teaching never goes away,” says Sinegugu, who is inspiring and is still a committed educator, deeply involved in teaching through private sector-funded Yes4Youth programme.

He is also an outspoken social and environmental activist who is fighting against an Australian giant titanium mining company, whose mission is to mine a large stretch of the magnificent Wild Coast. An award winning conservationist, Sinegugu has written more than 10 books, the latest of which is titled the Medicinal and Charm Plants of Pondoland.

The back-up vehicle transporting the group’s bags is driven by friendly Mzo Madikizela, whose grandmother was Winnie Madikizela-Mandela.

We are also joined by a trainee  guide, Mthandeni Dlamini from the Baleli area. He is a young, quiet man who is trying to make a success of his life, but lives in a community where unemployment is rife.

“This trip will stay with you for the rest of your life. Pondoland will never leave your mind and your heart. It will always haunt you in your dreams,” says Sinegugu.

* Shona will update us on her journey as and when conditions and cell phone signal permit, so watch this space.