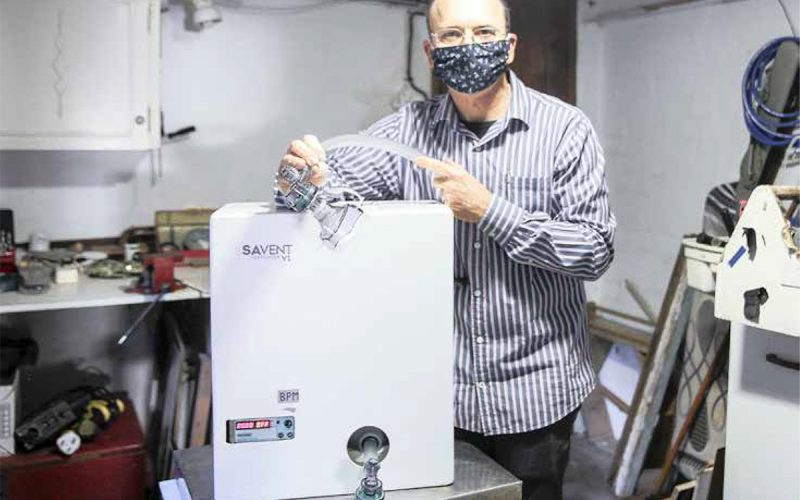 An inventor working day and night in his home garage during lockdown has come up with a cheap ventilator that has won a national competition and will now be assessed by Denel and other experts for production. Jess Nicholson reports

The Makers With Purpose ZA Ventilator Challenge at the weekend named a team led by Durban mechanical engineer Nick Matter as the winner.

Ventilators are essential for treating people seriously ill with Covid-19, but are expensive and difficult to procure.

The competition sought to tackle this by encouraging the design of machines that are easy to use and can be produced in big numbers at low cost.

Matter’s team will receive a R5 000 cash prize and its device would be presented to teams at arms company Denel and the University of KwaZulu-Natal for assessment.

Preliminary trials have already shown great promise and doctors were “delighted” with the device.

An outbreak of Covid-19 at Durban’s Wentworth Hospital halted clinical testing on the prototype a few weeks ago, but work was now back on track, said Matter.

A mechanical engineer, Matter brought together a small team to work on the project. They hope to produce 500 ventilators a week at about R40 000 each.

Dr Jean Pitot, one of the judges of the competition, said he was impressed with the robustness of the design, the practicality, and that it uses components that are widely available.

Pitot also commended the team for the length they had gone to in testing their prototype. “As things get worse in the country, and as the numbers really start to rise, we shouldn’t underestimate the role that makers and engineers can play in coming up with equipment, not just ventilators and hoods, but personal protective equipment systems and components. That can really make a difference.”

According to Durban anesthetist, Dr Mark Watt, having a basic device to help patients breathe while their bodies fight Covid-19 will be invaluable.

“While both private and government hospitals throughout the country are fairly well equipped with highly sophisticated state-of-the-art ventilators which cost up to R1-million, in a disaster situation, such as a quickly escalating Covid-19 pandemic, we will never have enough. So to give people a chance, we need basic machines, like the device Matter has made, to help people breathe, while they try to fight the virus.”

Fewer than 5% of people who contract coronavirus end up on ventilators, but in a population of 50 million, this is likely to be a huge number.

“The subject of ventilators has become an emotional and misunderstood topic.

At the start of lockdown, Matter, who runs Solmat Consulting Engineers and designs industrial processes and building services, switched focus, and began work on what is known as a mandatory mechanical ventilator.

This is a machine that takes over breathing for a patient. It can be adjusted to a patient’s weight by changing the volume of air per breath.

“We all became aware of the worldwide shortage of ventilators, and the awful decisions doctors have had to face, once the Covid-19 pandemic hit Europe and the US,” Matter said.

“Triage, the process of deciding who to save and who not, is a very hard part of the emergency procedures for doctors and a lack of ventilators aggravates this.”

Helping him with the ventilator, dubbed the SAVENT, were electrical engineers, Graham Gillet and Miles Walker, and a fibreglass specialist, Mark Lewin who made the casings.

The work has been non-stop.

“I bought a few Ambu bags – an Ambu bag being a full monty piece of ICU equipment with a mask, valves and tubes, for R800 ea. This is a device used to

resuscitate patients experiencing respiratory failure. All nurses are trained to use Ambu bags to keep patients breathing by squeezing the bag by hand. Each squeeze is a breath. The aim was to mechanise the Ambu bag, to function in the way a nurse would.”

Matter consulted Dr Hussein Cassimjee, an ICU specialist, and Dr Mark Watt, who helped him with the specifications. The doctors specified the machine should provide 20 breaths a minute, and be adjustable in air volume to cater for patients of different sizes.

It needed to provide 500ml air volume per breath, over three seconds: one second for inhalation and two for exhalation [an IE Ratio 1:2].

Dr Cassimjee advised: “Regarding pressure, it depends on the intended utility of the ventilator: If the ventilator is to be deployed in field hospitals as an emergency life saving measure, to be used as an interim ventilator while awaiting transfer to another institution (and where the time on the ventilator will be a few hours), then pressure monitoring may not be essential.”

Then Matter disappeared into the garage – his lockdown workshop – and later also colonised the laundry.

His wife, Sarah, said: “He worked continuously, with all the little pieces of timber, aluminium, cardboard and plywood we have stored. He found everything he needed (except for the Ambu bag). He spent days and days on exquisite detailed drawings until he perfected the design. There were tools as far as the eye could see.”

Electronics specialists Gillet and Walker came on board to help. Matter first built a wooden frame, and later the casing was made by fibreglass specialist Mark Lewin, whose business, Point Fibre Glass, designs and builds lifesaving  rescue craft, surf-skis and canoes.

“Smiths Manufacturing donated some motors, via director Nigel Oxenham and after about a month-and-a-half of development and refinement we were ready to try it. We could control the volume of air, with one lever, and we could control the breathing speed on the controller dial (although the final product will have a microprocessor which has a more sophisticated speed controller). We had set the IE ration to ‘one second in, two seconds out’ – this is fixed,” said Matter.

Before approaching Professor Mergen Naidoo, chair of the Covid-19 Task Team at Wentworth and doctor and academic at the Nelson R. Mandela School of Medicine, Matter tried his invention out on himself. 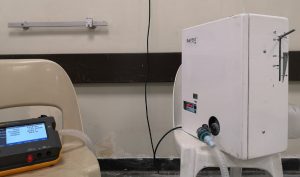 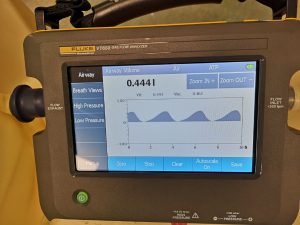 “It feels lovely. Although at first I had it set a bit high, so it made me a bit dizzy. The thing is, it does everything for you, so you really have to relax and just let it go. That can be easier said than done. I’m a qualified diver so I know how to let a machine breathe for you – although with diving you do that on demand. This doesn’t allow you even that little bit of control. Patients need to be sedated so they do not fight the mechanism.”

Dr Naidoo, in consultation with the Department of Health technical services and staff at Wentworth hospital used a gas analyser to trial the SAVENT, and Matter reported that the doctors were “delighted”.

“We did a preliminary evaluation with the Health Technology unit. The results look promising. The key now would be to use it in an actual human subject and this needs to occur based on patient safety issues being addressed and complying with regulatory permissions. Results will need to be forwarded to the National Ventilator Project and final decisions need to come from them,” he said.

Clarence Cowlen of the Department of Health Technology Services said “the clinicians definitely looked impressed with what was witnessed”.

Doctors then asked Matter if he could make the ventilator work for children. So using an internal device called a Cam, the team calibrated the machine. A small child would need 280ml per breath, a big patient more – 8ml per kg of body mass, up to 550ml.

The prototype has several other unique features: a specialised action motion, guiding the moving parts, which gives a good vertical travel of the action pad on the Bag and makes it easier to calibrate the amount of air. As well as a swivel arm for the motor, with a lever which adjusts the mechanism and gives the variability to change the volume of air.

Dr Khanyisa Khoza, who spent the past few years at a rural hospital in Limpopo, and now works at Albert Luthuli hospital, also saw Matter’s ventilator and expressed how useful it would be, particularly in under-resourced rural hospitals and field hospitals. She said it was very frustrating working as a doctor trying to save people’s lives, knowing there was equipment out there that would keep people alive, but having no access to it.

Matter also said it was frustrating having made a machine that could save lives, and having to jump through a number of hoops before rolling it out. “It feels as if  he calls for proposals and the production is a bit slow. If there is a crisis and we suddenly need 1 000 ventilators we won’t have time to make them. I’m ready, I’m using local materials, I’ve got a factory I can use, more than one in fact. After two or three weeks of setting up, we could build 200 per week to start with. If we had big backing we could make tens of thousands of these.”

Apart from funding, another obstacle is the certification process.

“Getting accreditation or approval is difficult because the front line teams are so busy. We can’t use the Savent until it has been certified. There are all sorts of levels of certification which follow complex medical regulatory protocols. If we follow the usual route, we might miss the boat. If we are not certified, funders are reluctant to fund, and doctors get sued.”

“The only solution would be to say to a patient, ‘I have a device that you can go onto that will keep you going’, and get them to give consent and sign a disclaimer. In Italy, when doctors were faced with too many patients needing ventilators at once they applied the rule of triage.”

“The age was set to 65, and then lowered to  60. If a patient was in respiratory failure and then someone came in who was younger, they would take the older patient off the ventilator, and save the younger patient instead,” said Matter.

Highly technical ventilators, typically made by companies like Draeger (Germany) range from costing R250 000 up to R1 million, and most big hospitals have two or three. Other South African teams are developing electro-pneumatic devices and trying to secure the rights to build older-style ventilators such as the British, Nuffield 200.

“We could add in a whole lot of computer stuff and refine and refine,” says Matter. “But we want to keep the SAVENT ventilator basic and cost-effective. So doctors working in rural and field hospitals, which are drastically under- resourced can keep people alive.”

He said: “This device runs on 230 V or 12 V and can even be used in an ambulance, or run off a car battery or solar battery bank, so one does not even have to have a normal power supply or a generator to keep it going.” 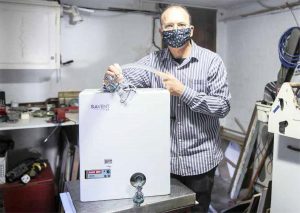 BANNER IMAGE: Nick Matter with the ventilator he worked on day and night for a month-and-a-half. Picture: Leon Lestrade/Daily News/ANA

• Jess Nicholson is a Durban-based freelance journalist, editor and artist. 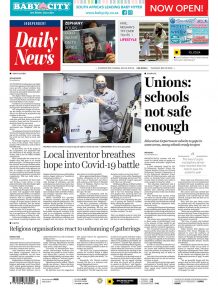 IN PRINT: How the Daily News carried the story. Click on image to download the page pdf. 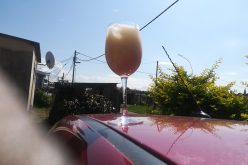 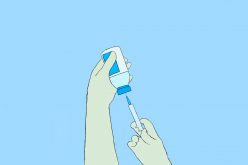