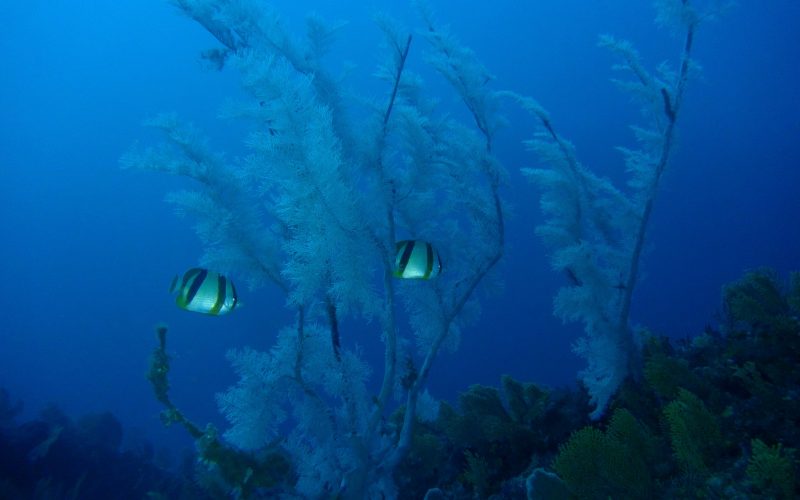 This deep reef, 69 metres below the surface near Amanzimtoti, lies in the Twilight Zone of the ocean noted for low levels of sunlight and virtual darkness for human eyes. A diverse range of soft corals and sponges thrive in these conditions. Photo supplied: ACEP Spatial Solutions Project

Rapid advances in technology – the Fourth Industrial Revolution – have transformed deep-sea exploration, enabling us to get a real-time view of what’s happening in the ocean deep. While this technology adds huge impetus to conservation efforts, it also opens the doors to exploitation of the ocean resources on a massive, unprecedented scale.

Four years ago, the South African government announced ambitious plans to fast-track the development of South Africa’s Blue Economy in ways that would generate R177 billion by 2033 and at the same time protect fragile marine ecosystems. Dubbed Operation Phakisa – meaning hurry up in Sesotho – the plans brought together leading representatives of the oil and gas industry, shipping liners, commercial fishing operators and marine conservationists. The key issue at stake: how best to tap into the economic potential of the oceans without causing irreparable harm.

These competing interests – and the role of marine science in enabling informed decisions – are expected to come under the spotlight at a three-day Ocean Stewards Science Session being hosted at the University of KwaZulu-Natal (UKZN) this week.

Central to this marine science gathering are recent expeditions aboard the RV Angra Pequena – a 72-foot wooden yacht equipped to conduct state-of-the-art research. A crane mounted on the deck enables the deployment of BRUVS (baited remote underwater videos) and an ROV (remote operating vessel). Mounted with high-definition video cameras, the ROV records and relays real-time deep-sea footage to monitors and a television screen mounted in the boat’s galley.

It was on Angra Pequena research cruises that Trimix divers recorded some of the first ever ROV video footage of live coelacanths flourishing in deep canyons off Sodwana Bay. These discoveries made world science history and gave birth the African Coelacanth Ecosystem Programme (ACEP) – a platform for researching biodiversity along the east coast of Africa.

After Operation Phakisa commenced, ACEP-funded scientists have used the Angra Pequena to map out rich, biodiverse marine habitats along the KZN coastline.

In terms of the UN’s Convention for Biological Diversity, South Africa has committed to expand this protection to cover 10% of its waters by 2020. But will this happen? This is one of many questions bound to be asked at this year’s Ocean Stewards Science Session.

Among areas earmarked for inclusion in the extended network of MPAs, are unique habitats of the uThukela Banks which are also lucrative prawn trawling territory.  Despite producing less than 2% of global seafood, it is estimated that prawn fisheries alone are responsible for one third of the world’s discarded catch, contributing to the decline of the ocean ecosystems.

The uThukela Banks have also been extensively surveyed for gas and oil, the results of which are not yet publicly known.

This time last year, a Roving Reporters investigation revealed that the Petroleum Association of South Africa (PASA) granted rights for gas and oil surveys to continue into the peak whale migration period which starts around June each year. These surveys use active sonar (Sound Navigation and Ranging) to locate oil and gas reservoirs in the sea bed. Anecdotal evidence indicates that these sounds, which travel considerable distances underwater, disturb marine mammals, having a particularly adverse impact on whales.

Amid fewer whale sightings on the KZN coast than had been expected at the start of the whale migration period last year, the issue made front page news and Roving Reporters Ocean Watch series was born, covering a wide range of critical issues affecting the health of the oceans.

“When it comes to conservation, the watchdog role of the media should never be underestimated,” said John Charter, CEO of the Human Elephant Foundation (HEF). Committed to creating a more sustainable world, the HEF recently joined forces with The Blue Fund – a joint initiative of Grindrod Bank and Wildlands – to promote the Ocean Stewards program which provides hands-on deep-sea research experience to marine biology students.

At the heart of the Ocean Stewards program is the risk that in a profit-driven world many wrong decisions may get taken with long-term disastrous impacts on the natural environment.

To counter this, the Ocean Stewards program takes young marine science students on a formative experiential journey that gives them unique insights into marine conservation. The aim is to equip a new generation of marine scientists with skills and confidence to ensure effective future governance and protection of the oceans.

Since its inception in 2015, more than 50 marine biology students have taken part in deep-sea research cruises on board the Angra Pequena. Associated mentoring covers marine science research, management and industry exposure, and the development of communication and writing skills.

In taking part in the deep-sea research expeditions, the Ocean Stewards have also been exposed to significant scientific discoveries, details of which are to be presented at this week’s Science Session.

Without a doubt, it is the associated real-time video footage from the Angra Pequena that inspires students the most.

“Seeing all this gives me hope that while the biodiversity of our sea is at risk, there is still a lot out there to conserve and protect,” said UKZN marine biology student, Njabulo Mdluli, after his recent research cruise on board the Angra Pequena.

On his return from a research cruise, Thamsanqa Nkosi showed his family and township friends clips of BRUV and ROV footage.

“I was at last able to show my folks what marine biology is all about,” said Nkosi.

But it is not just fascinating scientific discoveries that makes such footage valuable. The deep-sea surveys also provide insight into the extent of plastic pollution and destruction happening on the sea bed. At last year’s Ocean Stewards Science Session, footage of a large coral tree destroyed by commercial trawling nets highlighted the need to make the public aware of what is happening out there.

“The reality is that we rely on these industries (gas and oil, commercial fisheries and shipping) so we also need to work with them to find the best solution to problems we face,” said Tamsyn Livingstone, a Marine GIS analyst at Ezemvelo KZN Wildlife.

Operation Phakisa provides such a platform, and the Department of Environmental Affairs (DEA) must be commended for driving this initiative, said Livingstone.

But how close is the DEA to achieving these goals four years after Operation Phakisa began? Today’s presentations at the Ocean Stewards Science Session at UKZN Westville are expected to shed some light on this.