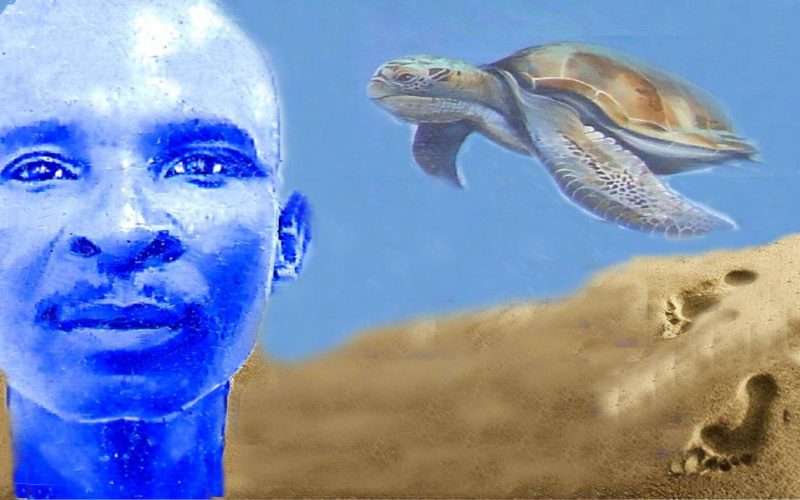 This Roving Reporters’ case study on a 54-year-old man in prison for killing an endangered loggerhead turtle has raised important issues about life and survival in and around the United Nations World Heritage Site, the iSimangaliso Wetland Park.

THERE was stunned silence when a Ngwavuma Regional Magistrate first pronounced his verdict and sentence: seven years’ jail for killing an endangered loggerhead turtle.

Later, in the court holding cells, Makotikoti Zikhali cried and banged his fists against the wall, wailing inconsolably about his ancestors having failed him.

The bones of Zikhali’s ancestors lie less than 6km away from where he killed the turtle – just south of Kosi Bay mouth, one of the most pristine and isolated parts of the iSimangaliso World Heritage Site. 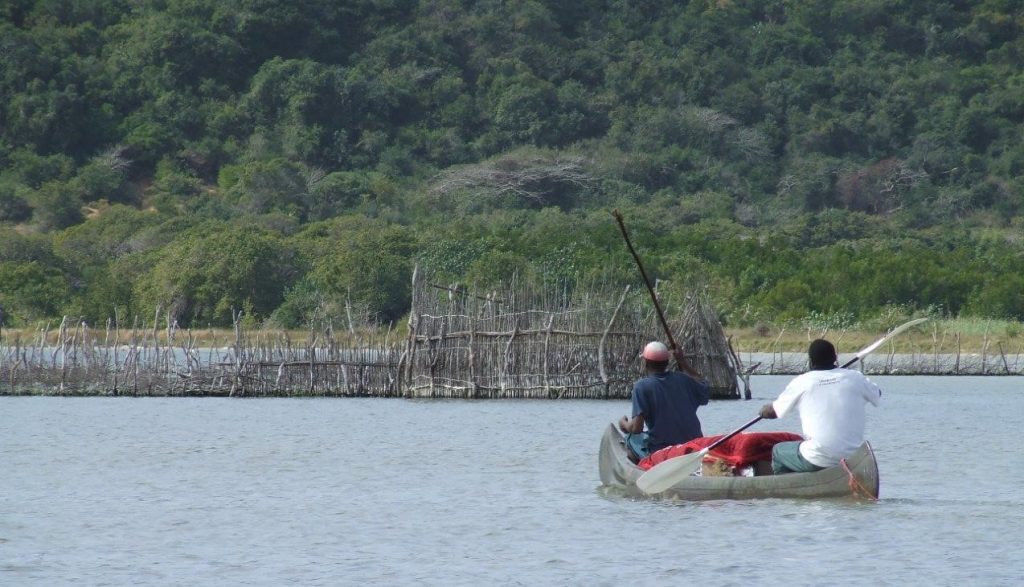 Two men paddle a coffin across a remote section of Kosi Bay lake. It was not far from here – on the other side of the mountain – where Makotikoti Zikhali was caught, literally red-handed, cutting up the carcass of a loggerhead turtle he had killed the previous night. Photo: Fred Kockott 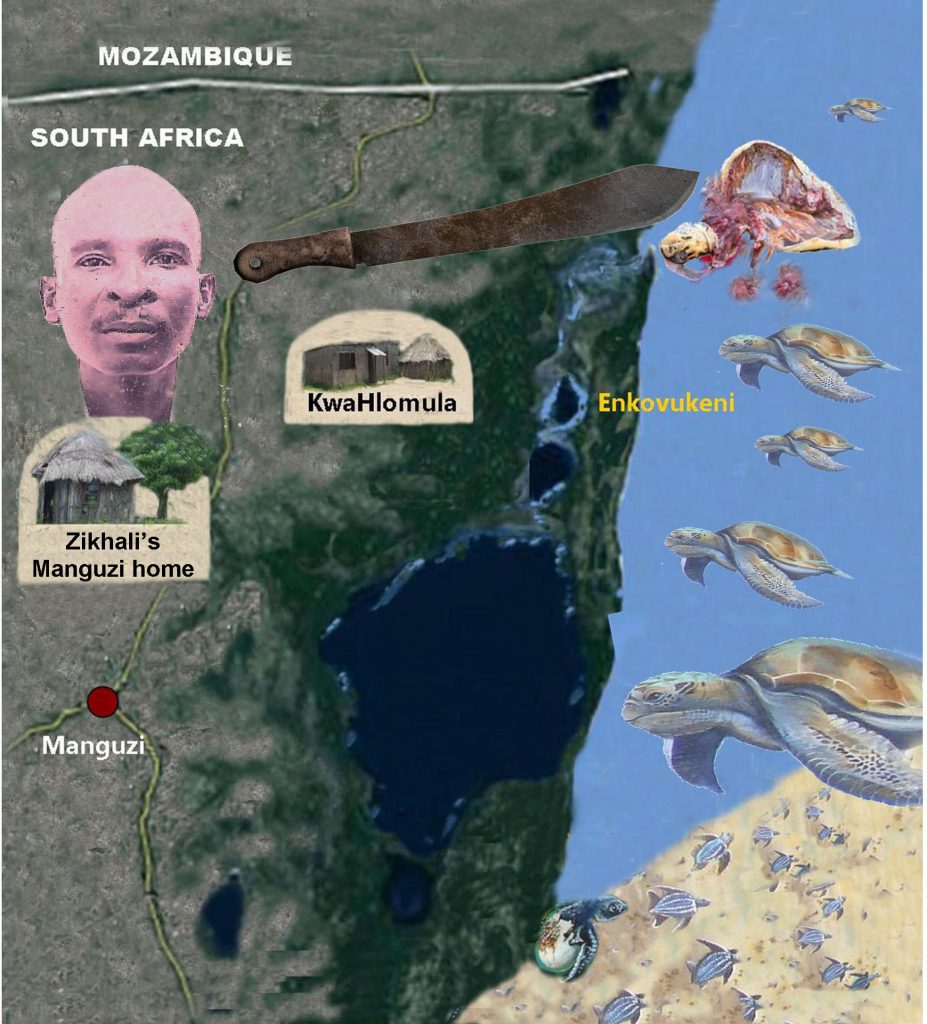 This map depicts where Makotikoti Zikhali was living in Manguzi at the time, and the deep rural area where he grew up, KwaHlomula, in the forest fringes of Kosi Bay lake.

It happened in the middle of the turtle nesting season, December 2009, when scores of endangered loggerhead and leatherback turtles, slowly lumber out of the sea to nest in sand dunes, laying up to 100 eggs at a time.

Caught literally red-handed, Zikhali admitted to killing the turtle for food and to sell for muthi purposes. “He cried out: ‘Please don’t hurt me! Don’t hurt me! Forgive me, forgive me! I know what I’ve done is wrong’,” said Eric Mlaba, the KZN Ezemvelo Wildlife conservation officer who arrested Zikhali.

In court, eighteen months later, Zikhali recanted this confession. This was despite overwhelming evidence against him.

His evasive testimony frustrated not only magistrate Munthu Khumalo, but also a close relative of Zikhali’s, Hlabathi Ndlovu.

Many years ago, Ndlovu had taught a young Zikhali the art of making fish kraals and spearing fish – a centuries’ old Thonga method of fishing and today one attraction of the iSimangaliso Wetland Park, a World Heritage Site. 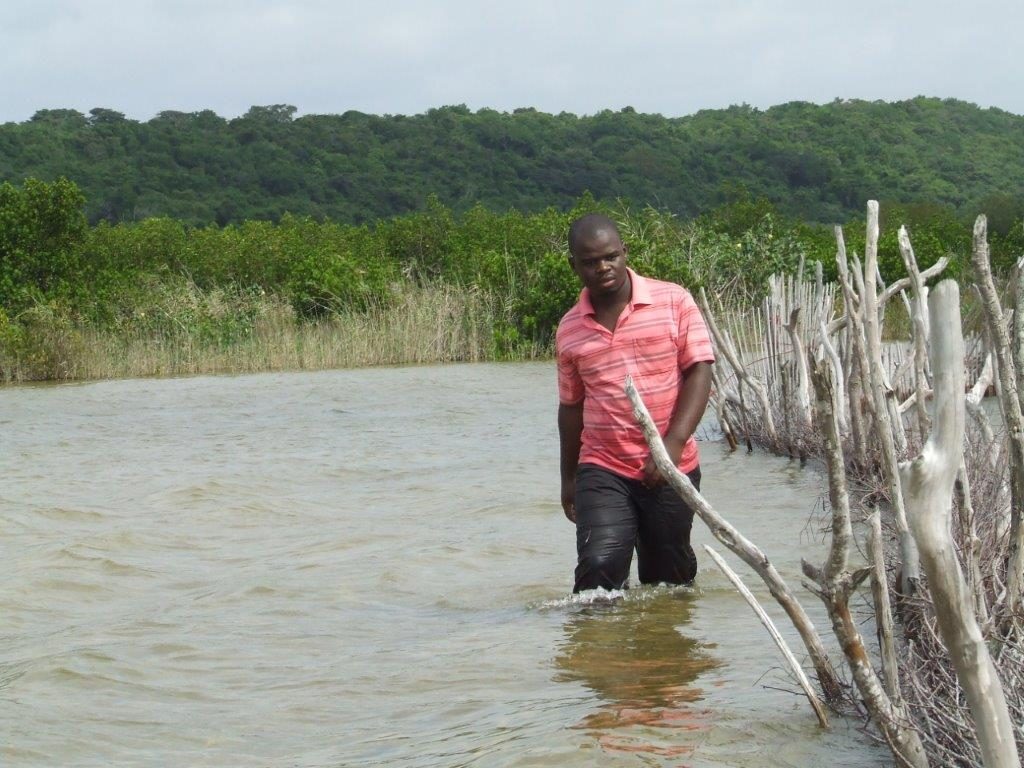 Sabelo Nsele, wades past a fish kraal in Kosi Bay. Nsele was one of several Durban University of Technology journalism who spent weeks on assignment with Roving Reporters working on the Turtle Butcher case study. Photo: Fred Kockott.

Ndlovu wanted to shout out, firstly to his friend in the dock: “Just tell them you did it!” and to everyone else in court: “C’mon man, we’ve been killing these things since time immemorial. Lots of people still do it. Why only arrest Makotikoti?”

But Zikhali, perhaps bolstered by muthi reputed to win court cases, stuck by a carelessly constructed story that he been fishing when he had happened, by chance, to stumble upon the carcass of the turtle.

So Zikhali never told the court how he had killed the tagged turtle, ZAST 081/667, or who he had intended to sell the turtle meat to.
Nor did the court hear how many turtles Zikhali had killed since childhood; that he, Ndlovu and other friends had grown up eating them.

What the court did hear was that this particular turtle had been tagged three days previously by Dr Ronel Nel, an academic from the Nelson Mandela Metropolitan University who heads up a research project at Bhanga Neck in the iSimangaliso world heritage site. 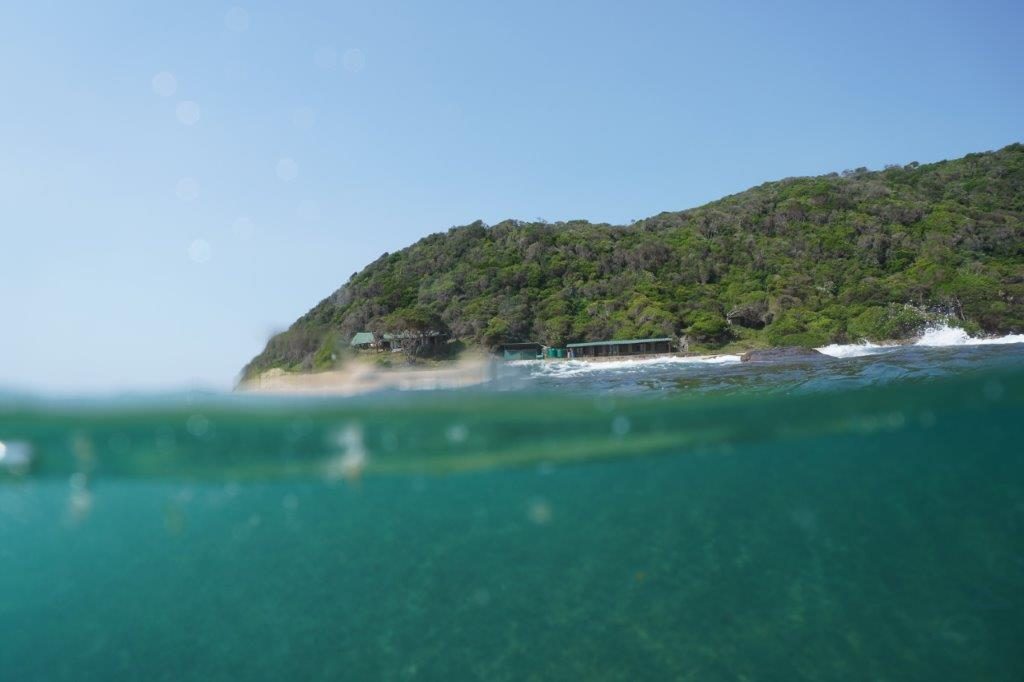 Records show that the turtle was about 15 years old and had probably travelled several thousand kilometres, from northern Mozambique or Madagascar, to lay her eggs in the protected sanctuary.

Recalling Zikhali’s arrest, Mlaba said he and a colleague had been on a routine beach patrol near Kosi Bay mouth on December 17, 2009, when they noticed footprints leading from the high tide mark into the coastal bush.

Following the tracks, Mlaba had noticed that someone had been cooking around a fire, braaiing crabs.

Further on, he saw blood stains on the grass and against a tree stump. Then he heard a strange noise: “Twah! Twah! Twah!” 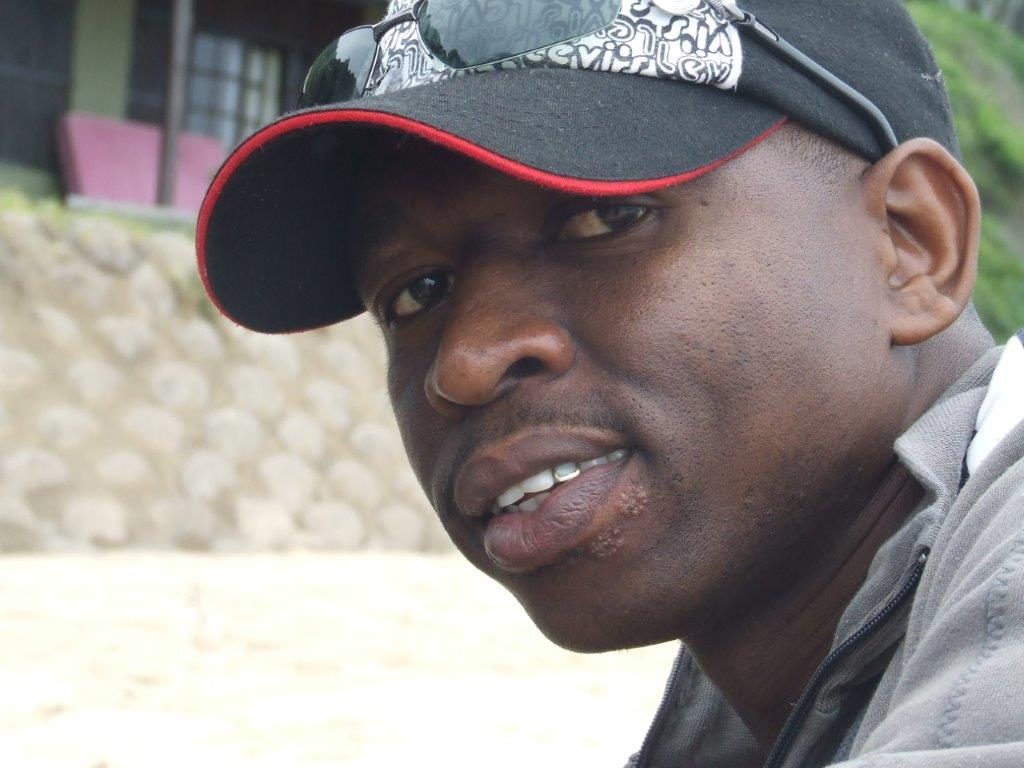 “It sounded like someone hacking a tree,” said Mlaba. Approaching a clearing, he saw Zikhali, hunched over, chopping at the carcass of a loggerhead turtle.

Neatly packaged parcels of turtle meat lay spread on a plastic sheet. Chunks of turtle fat had been squeezed into a 2l plastic bottle. Turtle flippers hung from nearby branches.

Zikhali fled when he saw Mlaba.

“But I am fast, hey,” said Mlaba. “I caught him. He was scared, shivering. I think he thought I was going to shoot him.”

Investigations also involved the SAPS Organised Crime Unit. There were suspicions Zikhali might be part of a muthi trade syndicate. Although no such evidence was presented in court, this possibility remained foremost in the prosecution’s case in calling for tough punishment.

“There is a lucrative underground trade in many countries, and indications are that, like the rhino horn situation, syndicates are at work and setting up structures and networks in southern Africa,” KZN Ezemvelo regional ecologist, Dr Scotty Kyle, told the court.

Kyle said that while turtle populations were rapidly decreasing worldwide, with the threat of extinction looming, recent indications were that endangered loggerhead and leatherback turtle numbers were increasing in iSimangaliso – one of the few sanctuaries in the world where this is the case.

“This turtle returned to this area because she had been protected in the past and her mother had also been able to breed in this area successfully,” said Kyle. “It would only take a few killings like this to reverse this trend that has taken over 40 years to achieve.”

In sentencing Zikhali early in 2011, Khumalo had said legislation governing endangered species provided for a R10 million fine or 10 years imprisonment, or both.

“I will however be lenient with you,” he said, referring to Zikhali’s personal circumstances – destitute and unemployed.

Khumalo initially imposed a seven-year jail sentence, but after legal consultations, amended the sentence to five years, with provision in place for Zikhali to be released on early parole after serving one-sixth of the sentence. 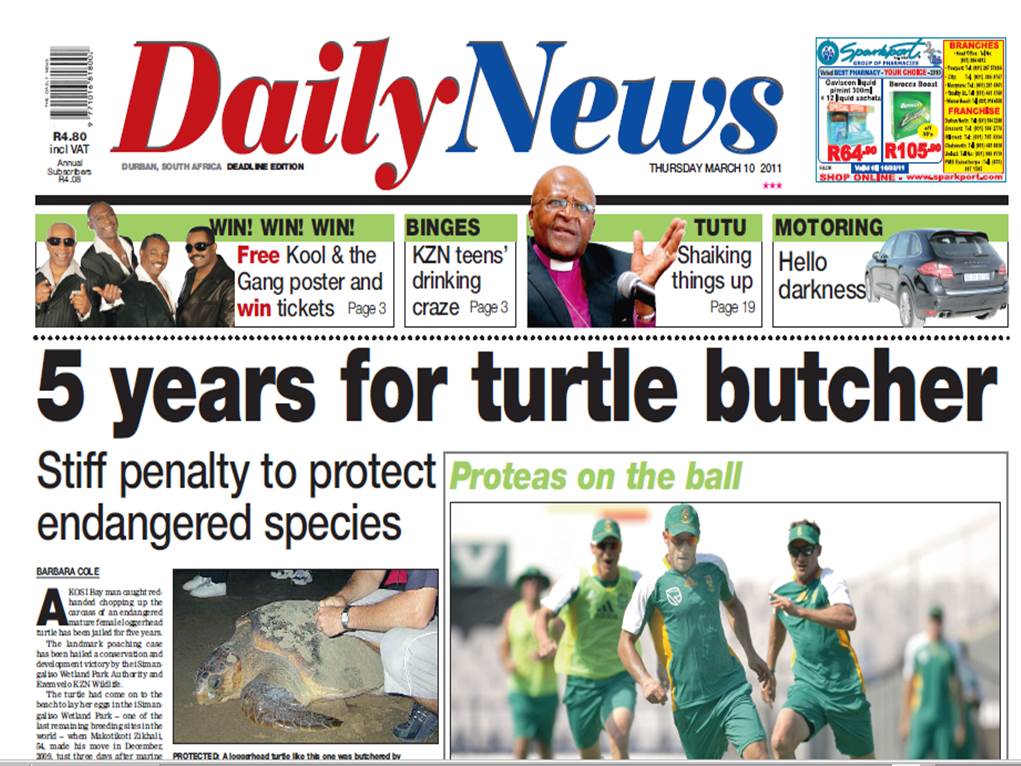 Zikhali’s case made front page news: “Five years for turtle butcher”. It was widely hailed a victory for conservation and development.

“No, I don’t have any contact details for his family,” said Malefane. “His file is closed. He was just a sickly person.”

Nor did the prosecution or iSimangaliso authorities know anything about Zikhali other than that he lived “somewhere around Manguzi – an outsider”. 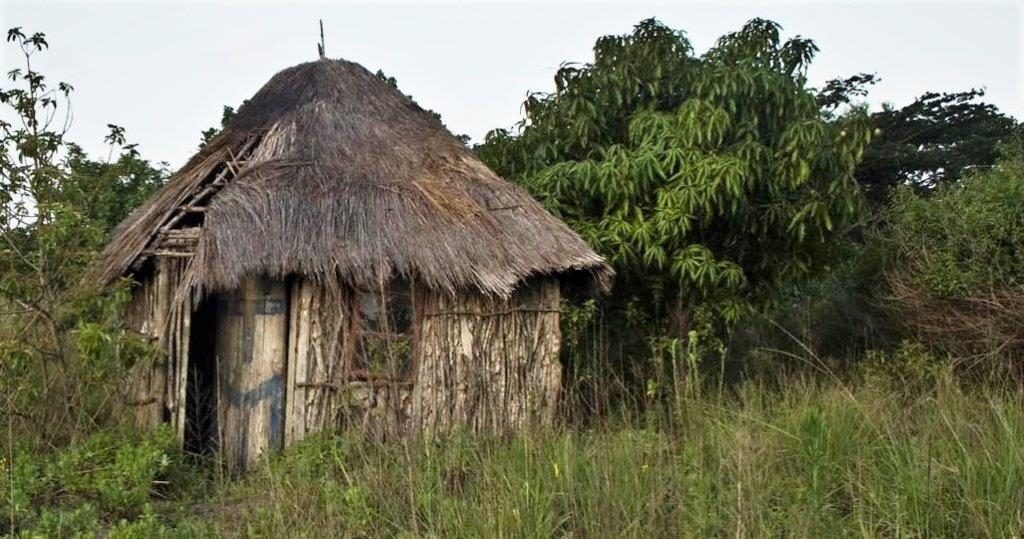 On assignment in the Manguzi area., the Roving Reporters team discovered the homestead where Makotikoti Zikhali had been living at the time when he was an active turtle poacher. It comprised two simple rondavel dwellings both of which had fallen into a state of ruin since since his imprisonment. Photo: Jono Hornby 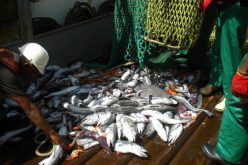