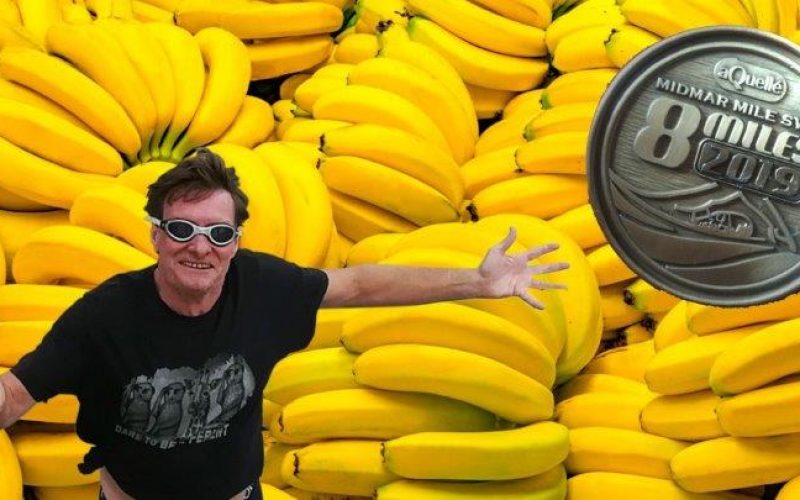 Roving Reporters is organising a pod of swimmers to slowly make their way along 22km of the Wild Coast to raise money for eco-tourism,   marine conservation and environmental journalism training.

IT seems veteran KwaZulu-Natal journo, Fred Kockott, 56, has gone bananas.
On completing all eight Aquelle Midmar Miles last weekend – a feat that many colleagues doubted the ‘washed up hack’ would complete – Kockott was challenged to swim an expanse of sharky Wild Coast waters for a paltry sponsorship of 50c per kilometre.
Kockott accepted! We guess the guy never passed maths at Matric level, or even mastered the basics of arithmetic. 50c per kilometre for the entire stretch of Wild Coast amounts to little more than Kockott spends in ordering a drink and meal at a North beach local.
“R1 for the first shark,” responded a Facebook friend, Inga Molzen.

Undeterred, Kockott has started planning a fundraising swim covering 22km of the Wild Coast earmarked, amid rock-like resistance from the community, for heavy minerals mining by the Australian mining company, Mineral Resource Commodities (MRC).
The idea, says Kockott, is to raise funds for eco-tourism along that stretch of coastline as well as marine conservation and associated environmental journalism training.
Kockott hopes to be joined by several celebrities and says he will also invite a top representative of MRC, and perhaps even Mineral Resources minister, Gwede Mantashe, himself to take part – even if it just be for a 1 km stretch.
“I have heard Gwede has dangled his toes in water now and then,” joked Kockott.

While several avid ocean adventurers have already expressed support, one colleague retorted: “Sure! Like I don’t need both my legs!”
To allay such concerns, Kockott plans to enlist the support of Ocean Guardian, a manufacturer of shark shield devices that create electromagnetic fields to deter sharks. The devices are widely used in surfing, scuba diving, spearfishing, kayaking, ocean fishing and for swimming protection around vessels.
In the meantime, Kockott reckons it was not feasting on bananas that gave him sustenance to cross the finish line of the 8th Midmar Mile at the weekend, but nougat bars made by Racefood.
In a twist of marketing, the former confectionary company, Wedgewood, has reinvented itself as an energy food supplier to athletes. It is now among official sponsors of top sporting events, including the annual Aquelle Midmar Mile.

This year, Kockott was among 225 swimmers who collectively raised more than R3.8 million for various charities by swimming all eight Midmar Miles last weekend.
Leading the pack on the fundraising front, Robert Tout, raised R91,800 for Save the Rhino Foundation, followed closely by the founder of 8 Mile Club, Stan Kozlowksi, who raised more than R80,000 for the Wildlands Conservation Trust, and 15-year-old Muhammad Adam who raised R52,860 for the Cancer Association of South Africa (CANSA).

And then there was the group of 16 milers – a dozen legendary marathon swimmers who on completing each Midmar Mile, swam back to the start in time to start the next race. They collectively raised R133,797 for the Dusi Umngeni Conservation Trust (DUCT) which champions clean rivers.
Kockott was the only 8 Miler swimming in aid of ocean conservation and is stoked to have got the issue on the fundraising agenda of the 8 Mile Club. “Hopefully next year, more people will join me in swimming for increased protection of our oceans,” said Kockott.
In an eleventh-hour fundraising bid, Kockott has challenged corporate sponsors to match R12,000 he has raised for WildOceans – the marine conservation arm of the WildTrust.
In the meantime, Yusuf Patel of the Architects Collaborative in Durban has already pledged R1,000 to the WildCoast Conservation Swim, and challenged others to follow suit.
After all is said and done, perhaps Fred has not gone bananas.

This story was first published in the Daily Dispatch. Click here to view the pdf. 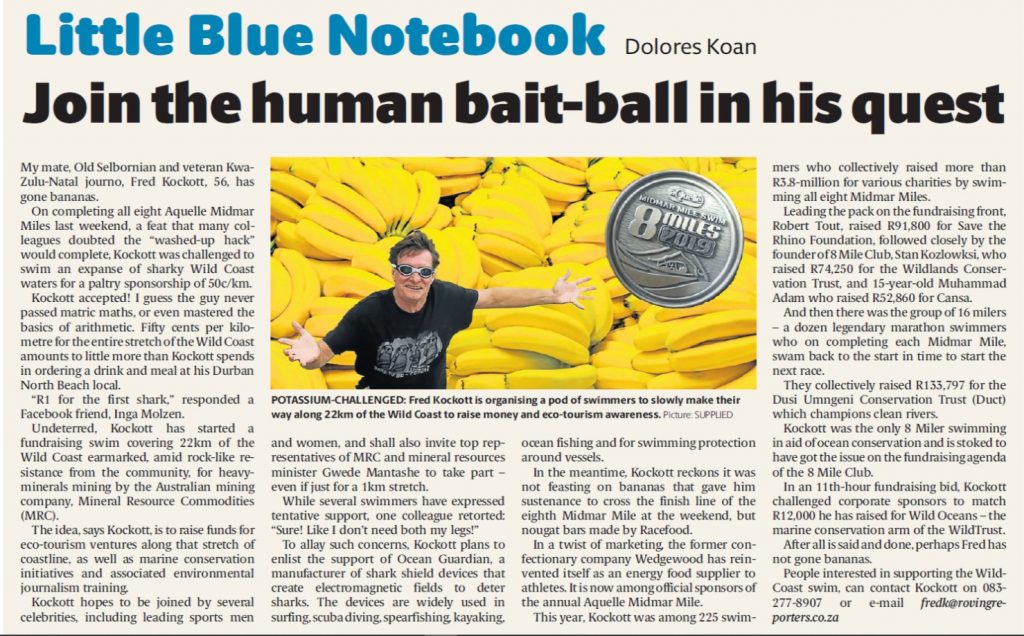