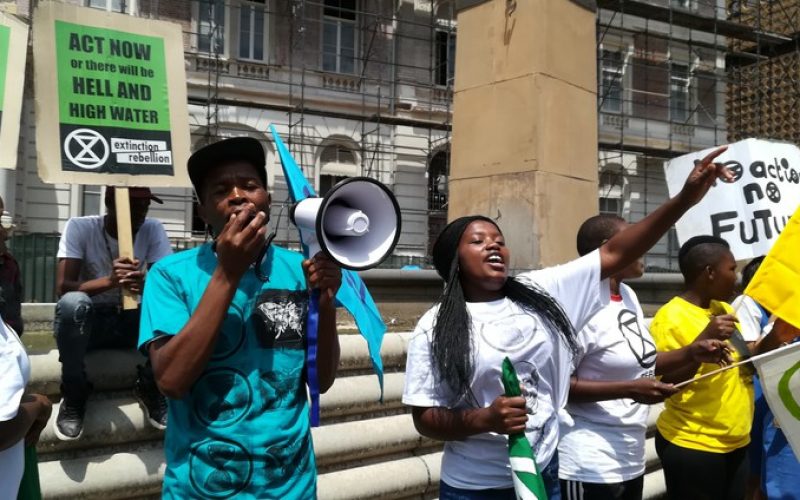 About 50 activists, led by Extinction Rebellion, picketed outside the Gauteng Legislature in Central Johannesburg Friday, on Friday afternoon. They called on government to declare a climate emergency, writes Zoë Postman

Some people were holding posters which read: “Greed kills our world”, “Tomorrow is too late”, “Capitalism is the problem” and “No action, no future”.

Sunny Morgan, coordinator for Gauteng Extinction Rebellion, told GroundUp that the march was part of a larger campaign to speak the truth about climate change and ensure that the future of the country is in the hands of responsible people.

The demands were for government to declare a climate emergency, act immediately to halt biodiversity loss, and reduce greenhouse gas emissions through a just transition that protects workers and vulnerable people.

“We are here outside the seat of government of the province to send a clear and unequivocal message to the government that they can no longer ignore the voices of ordinary people,” said Morgan.

He said the organisation has written a number of letters and memorandums to national government but “those letters have died a gentle death somewhere”.

“As long as they fail to respond and engage, we will be making our voices heard, until [government] not only engages with us, but they engage with us responsibly. And the objective with that is the declaration of a climate emergency,” he said.

He said declaring a climate emergency would allow for more resources to be allocated to tackle climate justice. It would also allow more coordination among government departments.

“We also want the government to tell people that climate change is not an event, it is happening as we speak,” Morgan told GroundUp.

He said the campaign would extend to the private sector, especially banks that are funding industries and projects that are detrimental to the environment.

Raeesah Noor Mahomed, a matriculant at Parktown Girls High has been boycotting school every Friday to raise awareness for climate change. She said she has been following the climate justice movement and has attended marches.

“But in December and January when the Australian fires were happening, I was looking into my matric year, supposedly the most important year of my life, and I couldn’t understand how I could carry on with matric like everything was normal because it’s not,” said Mahomed.

She said if natural disasters, like the fires in Australia had to happen in South Africa, the country would not be able to recover and the effects would be devastating.

Inspired by the teenage Swedish environmental activist Greta Thunberg, Mahomed said she decided to boycott Friday classes until the government declares a climate emergency and acts on it.

Munnira Katongole, also a Parktown Girls learner, said she was inspired by Mahomed and decided to join her Friday protests. She said it was important for young people to be at the forefront of the climate change movement because it largely affects youth. “I think it’s so pathetic to draft policies and strategies without the voices of young people when we make up the majority of the country,” she said. 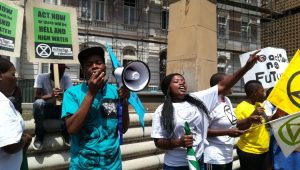 Now, have your say! 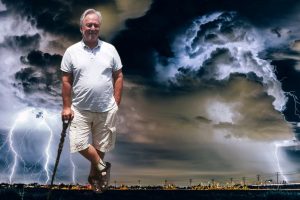 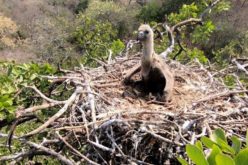