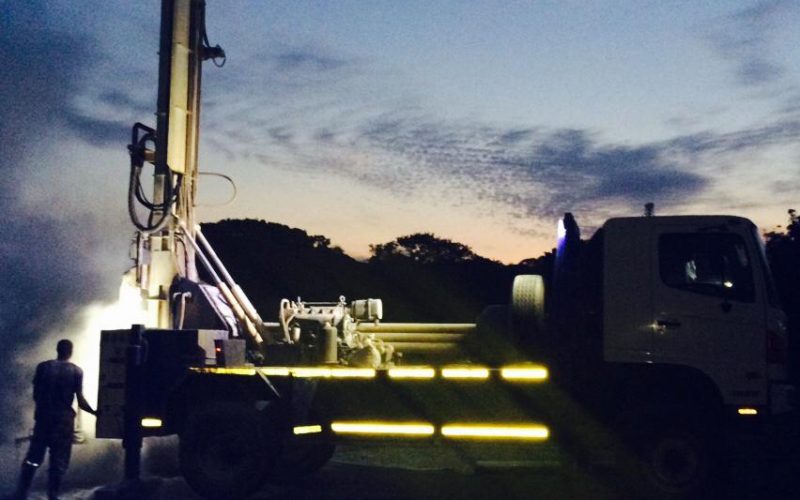 It has been more than a month now that “water outages” have plagued Port Edward and surrounding areas, affecting as many as 28,000 homes and more than 175,000 people, as well as luxury tourism establishments, holiday homes and B&Bs.

Armscor, South Africa’s national procurement agency, was called upon this week to help solve a disastrous water crisis unfolding on the lower South Coast of KwaZulu-Natal.
240 metres deep and only plumes of dust and a small puddle of water emerged from a drilling operation in search of water at Port Edward Primary School this week where more than 400 children have been attending classes with little or no tapped water.
It has been more than a month now that “water outages” have plagued Port Edward and surrounding areas, affecting as many as 28,000 homes and more than 175,000 people, as well as luxury tourism establishments, holiday homes and B&Bs.
In attempting to resolve the crisis, Armscor, South Africa’s national procurement agency, was asked to help to fix the main pump station that serves the lower south coast towns of Ramsgate,  SouthBroom, Glenmore and Port Edward and rural areas of iZingolweni.
“We were hoping Armscor would be able to procure a new pump faster and cheaper than we could,” said municipal manager D D Naidoo. “But we have since managed to get spares from a supplier, and plan to fix the pump station this weekend.”

Leading representatives of the South Coast Chamber of Commerce and Industry have been highly critical of the municipal response to situation, declaring it a humanitarian disaster in the making
They have also warned about the long-term economic impact, saying many tourists would not revisit after having bad experiences in the area.
Chairman of the Port Edward Ratepayers’ Association, Doug Powell agreed. “Resorts and B&B’s that do not sufficient water storage can’t accommodate guests. The loss of tourism revenue is massive – almost incalculable,” said Powell.
A local letting agent, Sharron Norton, said many people around the country had cancelled plans to come to Port Edward during the July holiday period.
“Others are waiting to see if the problem gets fixed in time,” said Smith.

Small businesses, too, have been hit particularly hard, with many shutting down when water is not available.
Direct losses had also been incurred in the construction industry with new developments coming to a halt.
“Concrete cannot be mixed or poured without water,” said Powell. 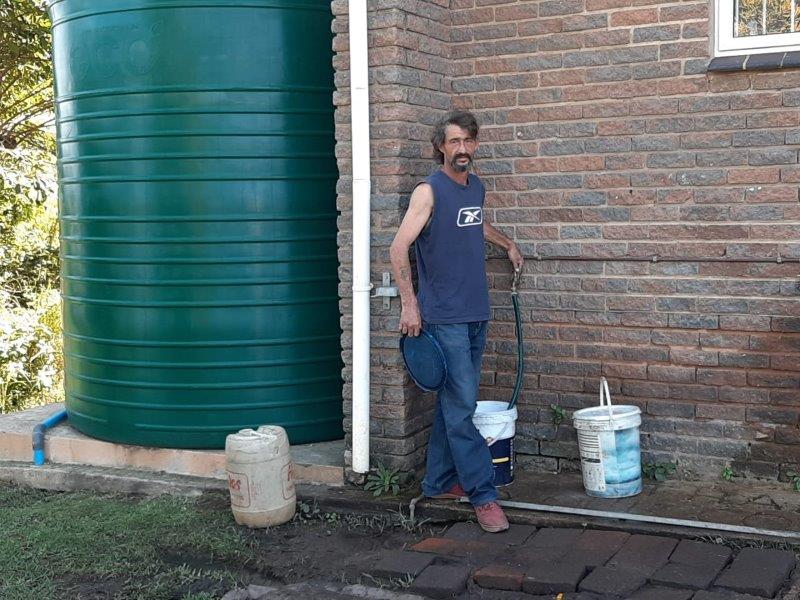 Paul Putter (above) and John Cripps (below) are among hundreds of Port Edward residents having to collect water daily from the local Methodist Church as the municipality awaits spares to repair a broken pump that supplies water to the lower south coast region. Photos: Fred Kockott 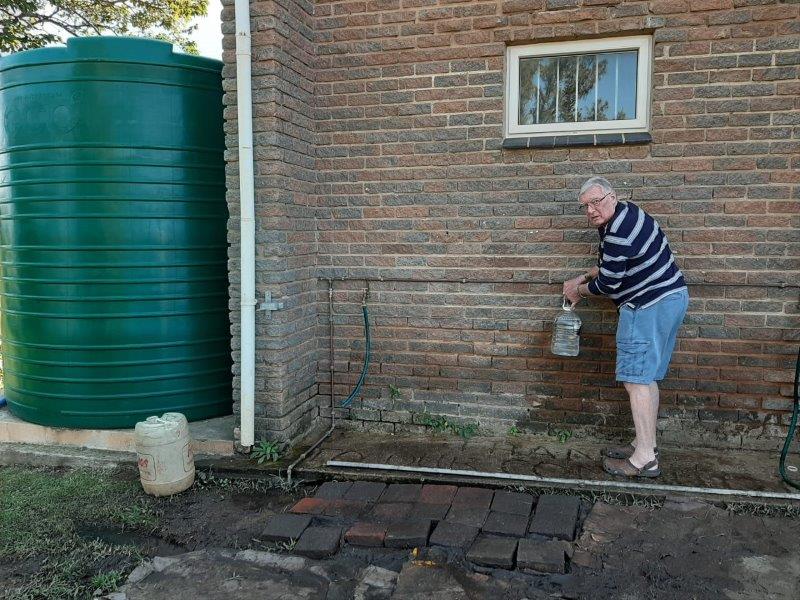 And in outlying rural communities, people who only started getting piped water a few years ago, have resorted to collecting water from nearby streams and rivers, some of which are highly polluted. This has given rise to health risks.

Piece of metal to blame?

According to Naidoo, it was a piece of metal that washed down Umtavuma River during recent floods in late April that caused the main pump at Umtamvuma pump station to breakdown.
“It got into the main pump and the pump obviously ceased,” said Naidoo. When operating on full capacity, the Umtavuma station has two main pumps and a spare. It now only has a spare pump functioning.
“We are pumping water at less than half the capacity,” said Naidoo.
Naidoo said the resulting crisis followed water supply problems throughout Ugu district over the past two years, largely due to deteriorating infrastructure. The Ugu district extends from Scottburgh in the north, Port Edward in the south and inland as far as Ixopo. It services about 750,000 people.
Asked whether the municipality had the financial resources to repair the Umtamvuma pump station and what the anticipated expenditure would be, Naidoo said: “Our biggest problem is the lack of funding to assess our water and sanitation challenges. It is totally inadequate. This financial year we will end up overspending due to high demand,” said Naidoo.

Naidoo confirmed that irregular expenditure of R243 million had already occurred as a result of normal procurement processes having been by-passed in dire situations. He said emergency provisions of the Public Finance Management Act would again be used to repair the Umtamvuma pump station. He said the repairs were scheduled to take place this weekend.
But Powell is not hopeful. Neither is Peter Brereton, the owner of Port Edward’s luxury B&B, Ocean View.
“The fact that they have had no spares on hand to fix the pumps at Umtamvuma speaks volumes,” said Brereton. “This is inexcusable. This is an essential service.”
Water from a borehole on Brereton’s property was used by firefighters on Wednesday this week when small fires broke out in the area.

“Half a dozen homes were at risk,” said Powell, who organised a recent emergency drilling operation at Port Edward Primary School in search for an underground aquifer. The school has about 400 children and with little or no water their health has been compromised. 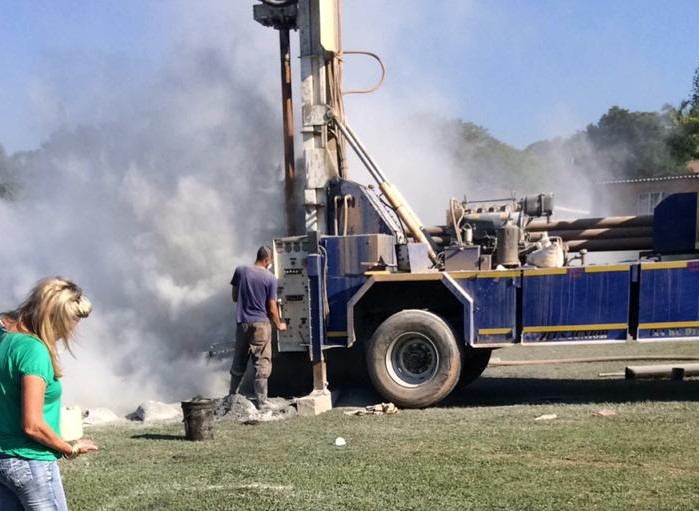 Drilling to 240 metres brought up almost nothing but dust. Photo: Supplied

On Monday drilling operations had reached a depth of 240 metres, but no groundwater reserves had been struck. Calling off the operation, a disappointed Powell said an alternative site would have to be found.
The borehole drilling venture is supported by local businesses, including CO Valves & Piping, a Kokstad-based drilling company, and Port Edward Caltex Garage.

Further afield, in areas such as Gamalakhe near Margate and Murchison near Port Shepstone, people complain that “water outages” have become as common as load-shedding in the cities.
Nonjabulo Cele of Murchison said water was being rationed with the supply cut at nights, from 8pm and 8am. She said in some areas a single communal tap served hundreds of people. When water ran out, people resorted to collecting river water, which was dirty and not safe for consumption. 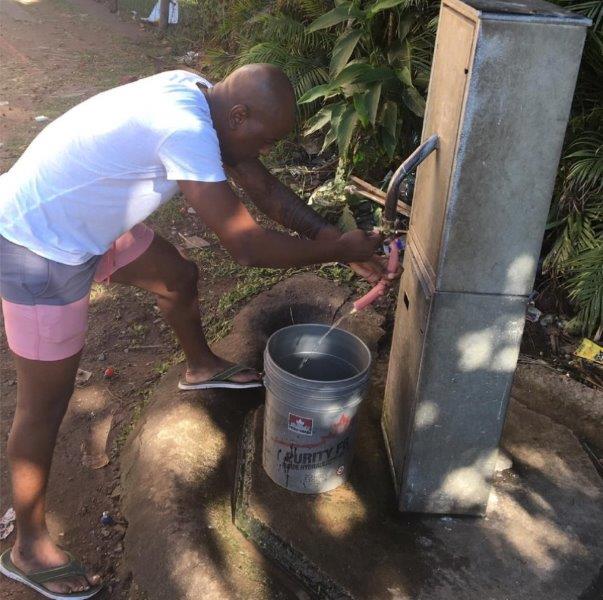 Ugu district municipality spokesman, France Zama said they were supplying about 87% of rural households with water. He said the municipality needed to replace old pipes and pumps that were not up to the task of supplying the entire municipal district, but lacked the funds for this.
He said the municipality would have to increase tariffs to fund projects. In the meantime, it had little choice but to impose water shedding, said Zama. – Additional reporting, Jessica Gaba 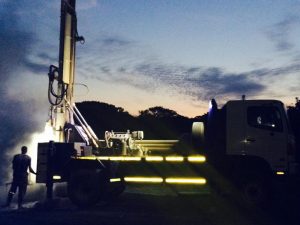