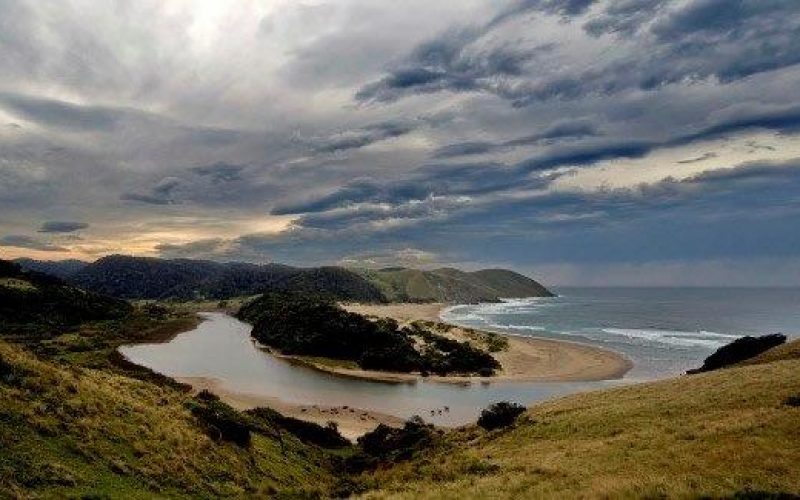 American journalism intern Luke Riley muses on southern skies, a patch of land beneath it, and the fight for its future

THE boy’s finger shakes as he points out the Southern Cross — his version of my North Star. But the jolts from the rutted dirt road disrupt the astronomy lesson more than they affect his cousin, asleep next to us on a pile of sleeping bags.

We were bouncing along on the back of a bakkie (pick-up truck), on our way to the home where we will be spending the night, on South Africa’s Wild Coast.

Before he nodded off the younger of the cousins had been admiring the myriad of colours scattered across the horizon at sunset. The stars that followed were among the most stunning I have seen.

I was reminded how elegant the stars can be in New Jersey after spending time in New York City,  but the difference between the night sky on the Wild Coast and its nearest metropolis are not comparable. 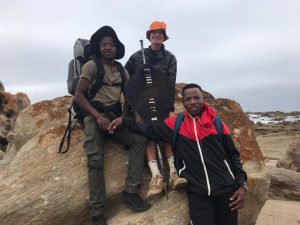 THREE AMIGOS: The writer, Luke Riley, flanked by guides Mthandeni Dlamini (left) and Lonwabo Dlamini. The Dlamini cousins are a new generation of Pondo who recognise they have a responsibility for their land. 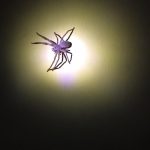 ALONG CAME A SPIDER: An eight-legged calls on Luke Riley while he works on this story in bed.

My visit to the Wild Coast was prompted by plans by a group of ocean adventurers who are setting out to swim a 22 kilometre stretch of this coastline earmarked for heavy minerals mining by the Australian outfit, Mineral Resource Commodities.

Taking place between April 26 and May 2, The Wild Swim intends to raise R250 000 for eco-tourism in the area and marine conservation initiatives within the Pondoland marine protected area.

The swimmers will be put up in home stays during the challenge, with some of the funds raised being used to upgrade them. Currently none of of them have electricity, running water or flushing loos.

Malombo Dlamini was the first to greet me at one these home stays – a few rectangular buildings with corrugated iron roofs, a rondavel and a long drop with a remarkable view of the surrounding scenery.

He appeared mystified by my fixation with the stars. My companion, Margie Pretorius, chairperson of Sustaining the Wild Coast (SWC), explained I was not used to it.

It was also the first time I had seen the purple variety of sweet potatoes we had brought with us on the bakkie.

The bulbs were for Dlamini, a small-scale farmer, who receives agricultural guidance from SWC and colleagues.

The next morning Dlamini took us past fenced-in patches of sweet potatoes and compost to a plot with a view of the ocean and surrounding rolling hills. It was here that Dlamini planned to plant the bulbs. He showed us the fields he hoped to clear, explaining he wanted to use pigs — nature’s plough — to remove debris and brush and make the soil usable for cultivation.

But before the pigs could do their work, he would need the community’s approval.  He was anxious not to ask for too big a plot, because he shared the land with neighbours.

Like almost all of Pondoland, which includes the northern Wild Coast, land is communally owned. It’s a traditional system of tenure that brings complexities and obligations unfamiliar to city folk or owners of private land. 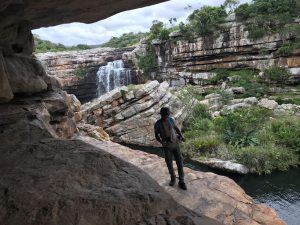 CLIFF-HANGER: The future of beauty spots like this jumping spot for dartedevils on the Pondoland coast hangs in the balance amid plans to mine Xolobeni for mineral sands.

Autonomy over the land is a central concern in this part of the world and it goes far beyond pigs and potatoes.

Dlamini’s home is not far from Xolobeni, an area between the Mzamba and Mtentu rivers where Australia-headquartered Mineral Commodities is seeking the right to mine for titanium and other minerals.

The prospect of mining has drawn opposition from some in the community, although others see it as a source of income, jobs in a place where steady paid work is scarce.

I met Dlamini a for the first time a few days before our night at his homestead. He was at a meeting of locals who are against the Xolobeni Mineral Sands Project.  They had gathered in a small building near a preschool to plan their next move. The meeting was also about  the Wild Swim, a 22 kilometre swim along the coast due to take place from April 26 to May 2. The swim intends to raise R250 000 for eco-tourism in the area and marine conservation initiatives within the Pondoland marine protected area.

The swimmers will be put put up in homestays during the challenge.

Also at the meeting was Sinegugu Zukulu, a local legend.

He would late be our guide for a few days on a hike from the Mkambati Nature Reserve reserve to the Wild Coast Sun, an apartheid-era, casino-resort on the coast’s northern extremity. 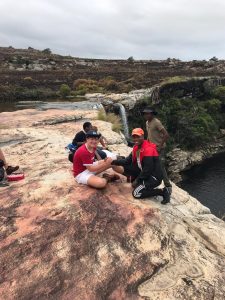 HIGH ADVENTURE: Michael House boys and their guides at the upper waterfall within the Mkhambathi Nature Reserve.

Joining us was a group of boys from Michaelhouse, the prestigious high school.

Zukulu was undeniably wise and having grown up in the Baleni village of Amadiba knew the Wild Coast like the back of his hand.

Knowing the boys were keen for an exciting challenge, he led them to one of his favorite spots: a cliff about fifty-feet above a lovely river – perfect for jumping into the rushing water that flowed over several pristine waterfalls before streaming into the Indian Ocean.

LEGENDS OF THE FALL: A Waterfalll spills into the Indian Ocean at the Mkhambathi Nature Reserve.

Zukulu has done the jump many times since he was a boy, but now he had reached an age (which he was reluctant to disclose) where his body might regret the leap.

He acknowledged as much, but like any good guide he went first, dislocating his shoulder in the process.

The pain forced him to leave us under the direction of his young apprentices, twenty-seven-year-old cousins Lonwabo Dlamini and Mthandeni Dlamini, as he trudged back to one of the few high spots of the region where a phone can get service.

Before his injury, Zukulu had taken every opportunity to share his knowledge. He would pause on a stiff stretch of the hike to point out an indigenous plant unique to the area, or to talk about a ritual meant to bring rain in one of the many estuaries we passed.

He advised his apprentices, to record his teachings, reminding them that one day they would take over.

Would they be able to carry the torch he passed down to them?

Could they show others the way, be that Southern Cross? 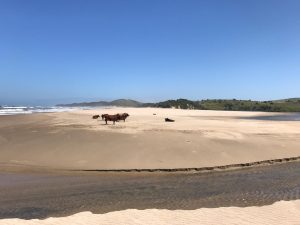 Their responsibilities would be about more than providing a good experience to a group of highschoolers. It had to do with an appreciation for the land, and a willingness to fight for its preservation.

After waving good by to Zukulu as he was driven away for medical attention, I waited for the Dlamini’s to see how they had done. They returned with smiles as bright as the stars, despite the chilling rain.

Together over tea they acknowledged the responsibility was being passed down to them — and not only for that day’s hike.

They believed they had a duty to preserve the land and their people’s way of life.

Their grandfathers had resisted outside interference. Now they felt it was their turn. – Roving Reporters

Click here to read more about The Wild Swim 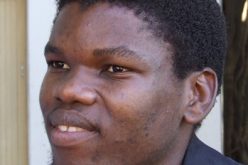