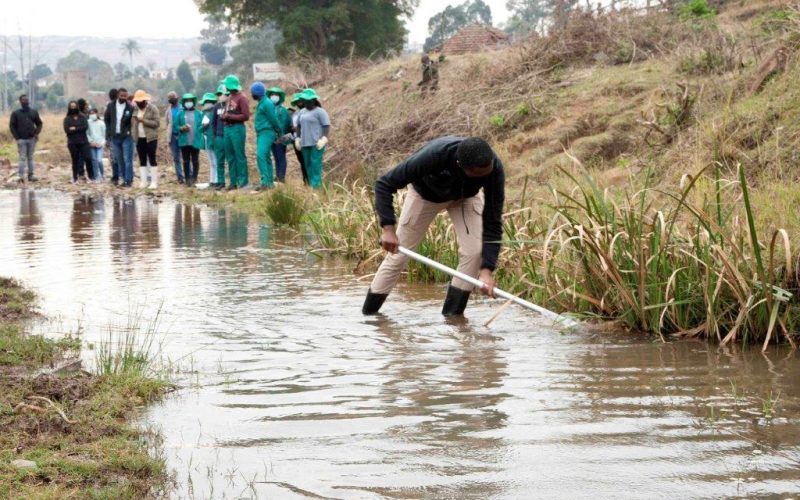 A community-based programme is helping to clean rivers in the KZN capital. Mlu Mdletshe and Matthew Hattingh report.

They had plenty to do.

The river and its banks were littered with plastic waste, disposable nappies and a host of other trash. Thirsty alien vegetation had taken root in the watercourse too and the youngsters wielded weed wackers and slashed with machetes to clear these unwanted plants too.

After some time bagging rubbish, the Enviro Champs gathered at Edendale’s DCO Matiwane community centre where they did water quality monitoring demonstrations for the public.

It was important work because river and wetland health affects the wellbeing of communities in the area – and far beyond. 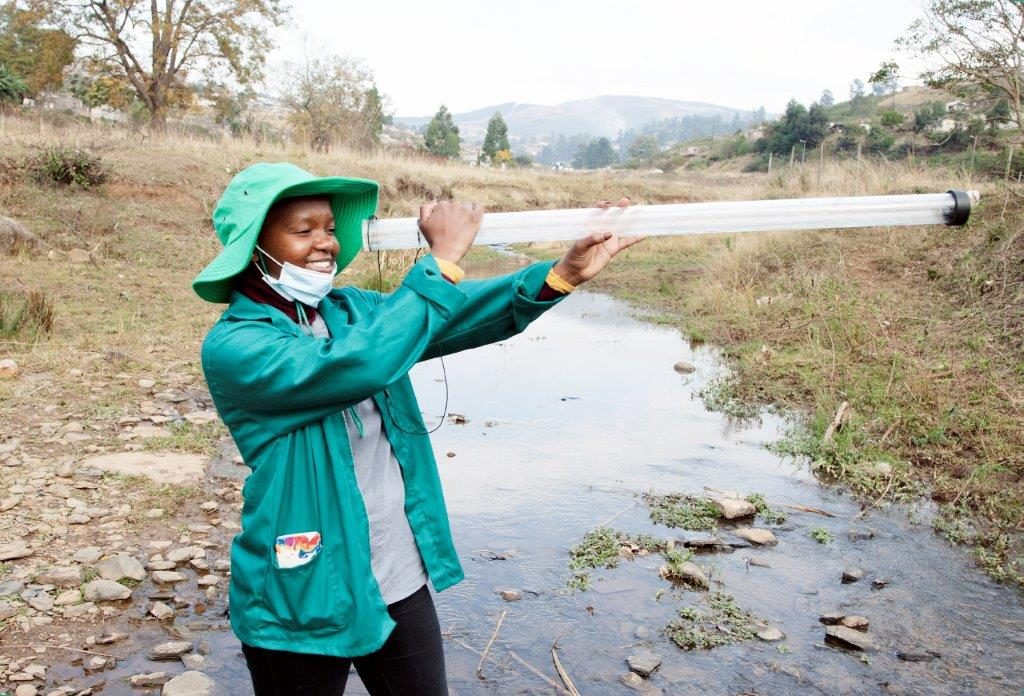 THE LONG VIEW: Enviro Champ, Sanelisiwe Nzimande takes a turbidity reading using a clarity tube. Water clarity is a measure of underwater visibility in rivers and streams. It indicates how much fine sediment, algae and other particles are in the water column. Reduced clarity can be harmful to the animals living in or near the water. It also restricts sunlight from getting to the plants that need sunlight to photosynthesise. Picture: Khaya Ngwenya

The Willowfountain (also known as the Wilgerfontein) rises in the hills to the south-west of Pietermaritzburg and becomes increasingly polluted as it winds its way down into the provincial capital. Here it joins the Msunduzi River, itself a tributary of the Mgeni River.

The Mgeni is the region’s principal river. Its catchment supplies water to more than two-fifths of the people of KwaZulu-Natal, living in its two biggest cities, Durban and Pietermaritzburg. It’s also one of the country’s dirtiest rivers.

Happily, a lot of good work was being done to remedy this. And as of earlier this year, funding from the Presidential Employment Stimulus – the national job creation initiative launched in the wake of the Covid-19 pandemic – has helped to step up efforts.

The Duzi Umngeni Conservation Trust, which for many years has been running or supporting a host of programmes to improve the health of the river system, was approached by the Department of Science and Innovation to establish a community based water management programme using Presidential Employment Stimulus money.

The funding made it possible for trust and its partners to enroll 300 Enviro Champs on a three-month programme called Amanzi Ethu Nobuntu. This translates roughly from Zulu as “our water and humanity”. The programme is community orientated. Recruits, who are drawn from the region, engage with residents at their home, and talk to them about the importance of keeping rivers and wetlands clean.

The Enviro Champs are no older than 35 and until signing up, were unemployed. Now thanks to the stimulus money, all received a stipend, providing them with a little financial freedom and the opportunity to contribute to the wellbeing of their families. 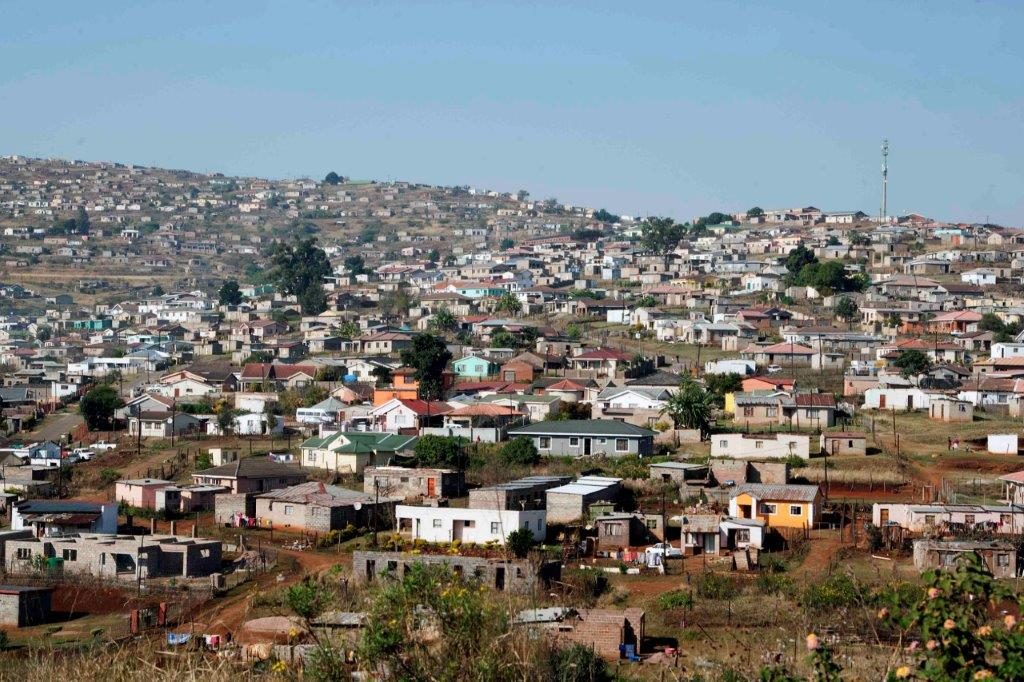 WIDE IMPACT: Young people living near the banks of Willowfountain River in Edendale Valley, Pietermaritzburg, are being enrolled as Enviro Champs to help educate others in the community about the importance of keeping rivers clean. Picture: Khaya Ngwenya

They have been trained to use practical, citizen science tools to gather information on river health and have learnt to monitor illegal dumping sites, leaking sewers, and burst drinking water pipes. They gathered this data using a mobile app which was being used to help build a bigger picture of the health of the catchment area.

Among the Enivro Champs were interns enrolled on an Amanzi Ethu Nobuntu project run by one of the trust’s partners, Liberty, the Edendale-based not-for-profit organisation.

Liberty interns have been learning about ecology, recycling and waste management, as well as acquiring business skills. They have also been put to work clearing the Willowfountain and nearby KwaPata rivers and engaging with residents.

Willowfontein local Ntethelelo Zuma is a fine example of how the project has been doing good for the environment while changing the lives of the individuals involved.

The 24-year-old said when he applied to join Amanzi Ethu Nobuntu the health of rivers had hardly crossed his mind. 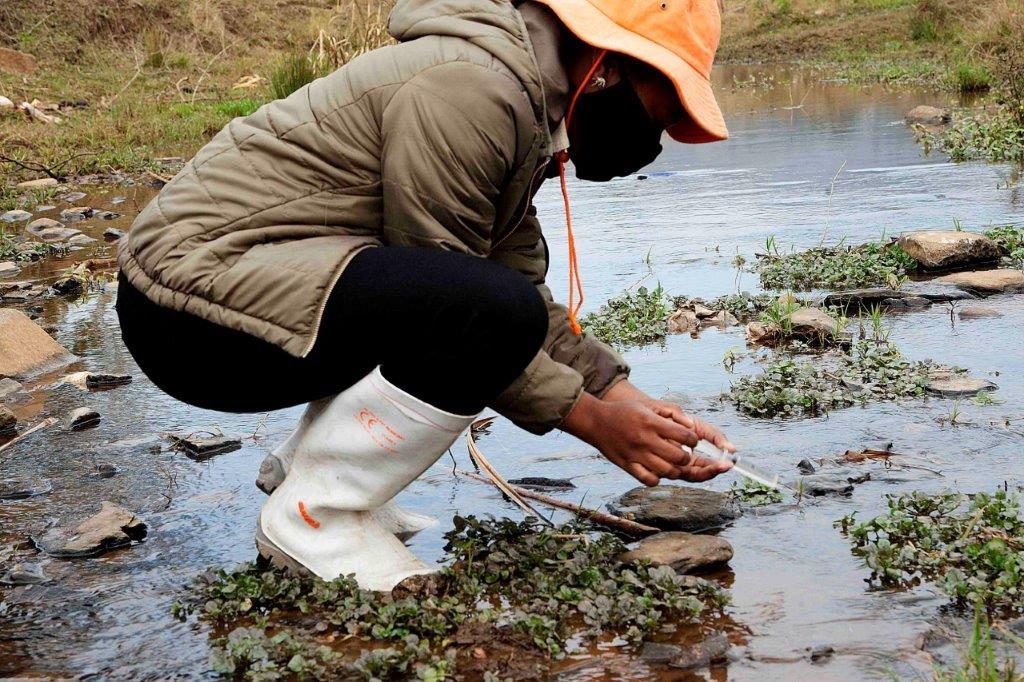 “To be honest I did not know much about the environment. Whenever I saw old women picking up litter, I asked myself why they did that. I now understand that picking up litter is very important and it is something we all need to be involved in.

But now his eyes have been opened.

“I have learned the importance of keeping my environment tidy… monitoring the river because there are animals who live in the water while others depend on it for drinking… and they all rely on us to clean up after ourselves,” said Zuma.

It’s been a boon to earn some money and to be able to help put food on the family table – “I have three other siblings at home, we live with our grandmother, uncles and big brother.”

And it’s not just his own family who have been won over to the environmental cause.

“The community shows gratitude for the work we do on the environment. They always tell us that they wish to see our initiative go very far and some have even assisted us. I think they can see the results of our labour and have begun to help us raise more awareness,” he said.

Which is not to say that everyone is a convert to the cause. He said some residents did not respond well to the Enviro Champs’ appeals, which was demoralising for the interns and short-sighted.

“What people don’t seem to know is that they can make some money out of recycling their old plastic bottles. In our engagements with the communities we found that many people do not know this. We come from different homes, but if we all recycle, we can make a difference in our lives.”

Zuma was born and raised in kwaPhupha, in Willowfontein. Phupha is Zulu for “dream” and the youngster was now dreaming about starting his own green business future.

“As an Enviro Champ I wish to one day start a programme similar to this one, and welcome my own students to teach about the importance of river health and waste management. That way we will be able to look after our environment as a community,” he said. 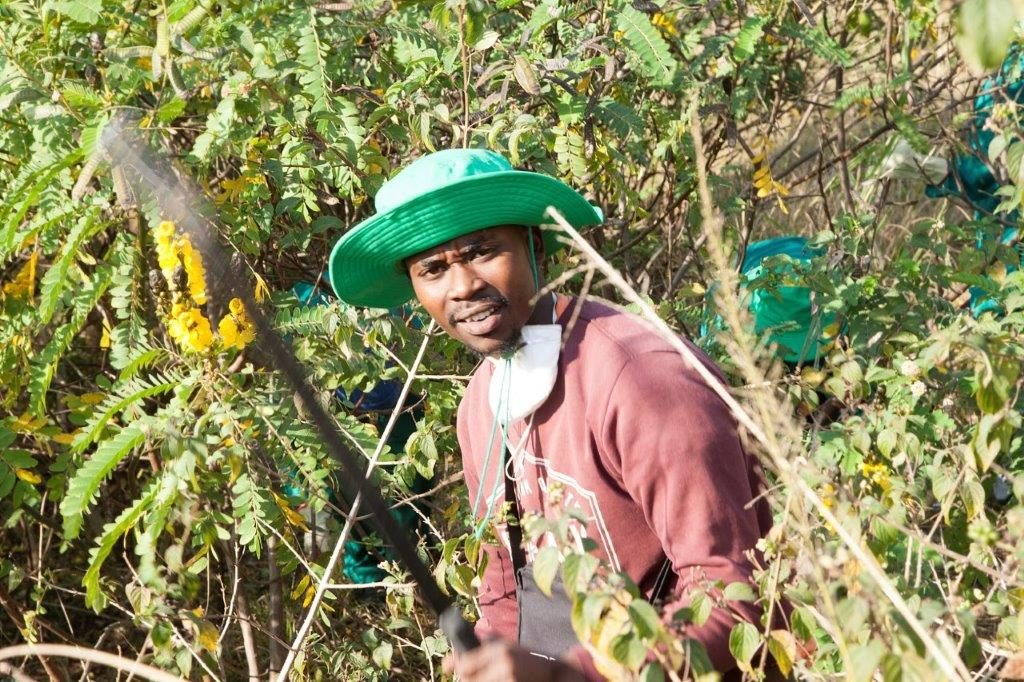 Like Zuma, Wandile Buthelezi said his family was grateful he was now able to help put bread on the table. They had also become aware of the importance of recycling and Zuma was seeing career opportunities in that direction too.

The 25-year-old, who had been unable to find a job after completing his studies in Public Management two years ago, now takes pride in calling himself an Enviro Champ.

“Through our learning and exploring, I have grown to enjoy working with natural resource management. I was very fortunate to be a part of the Amanzi Ethu initiative because I have gone on to discover many things about the environment and our rivers which I did not know about before,” said Buthelezi.

He said the work had exposed him to many things for the first time, including around biodiversity – “things the whole community had not been aware of regarding the river and natural resources. We pass on to them what we learn during our exploration.”

Like his colleagues, Buthelezi said that engaging with the community had been both rewarding and tough.

Some people were not interested in heeding the interns’ advice about river health.

Mlu Ntuli, founder of Liberty, paid tribute to the dedication and passion of the Enviro Champs.

He was also impressed by the success of the interns in working with their communities, despite sometimes facing difficulties.

“What is also great is that people are willing to engage during our door-to-door programme and other platforms such as social media. Some community members have voluntarily bought the team drinks and lunch in appreciation of their work,” said Ntuli.

Faye Brownell, Duzi Umngeni Conservation Trust, general manager, felt the Amanzi Ethu Nobuntu project was proving to be a success and said it provided a model that could be replicated.

“It is something that can spread to every catchment in the country. It is a solution that looks at job creation on a large scale in every community, the restoration of our catchments, public-private partnerships, and data gathering on river health and basic services for the benefit of government and civil society,” she said. 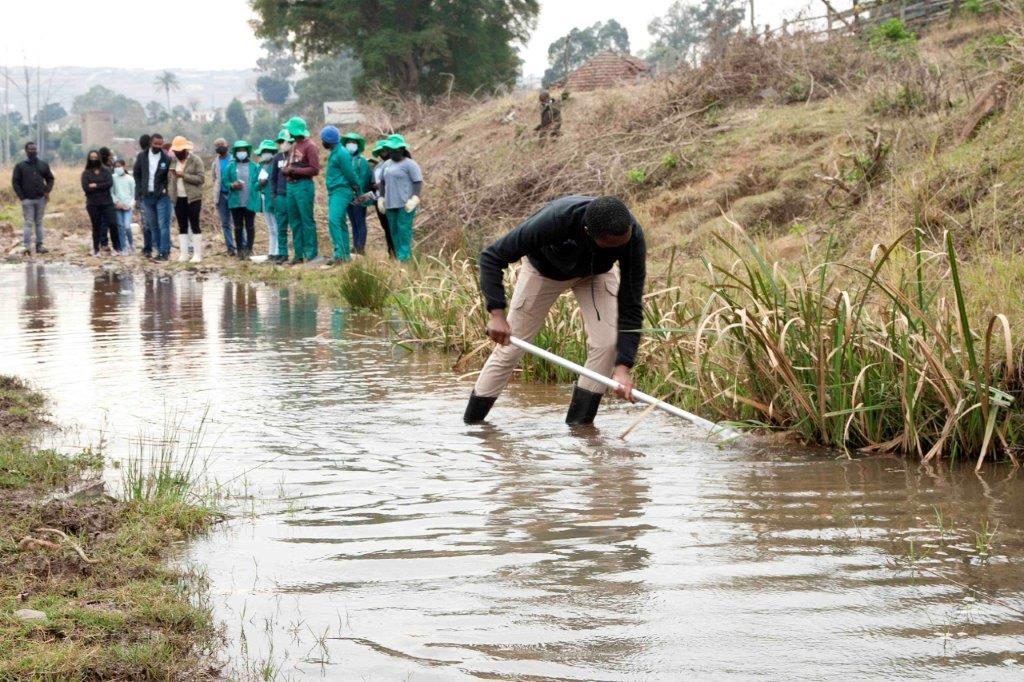 Nhlakanipho Zuma, a Hydrology and Soil Science graduate from the University of KwaZulu-Natal, gathers macro invertebrate samples from the Willowfontein River to help assess the river health. Picture: Khaya Ngwenya